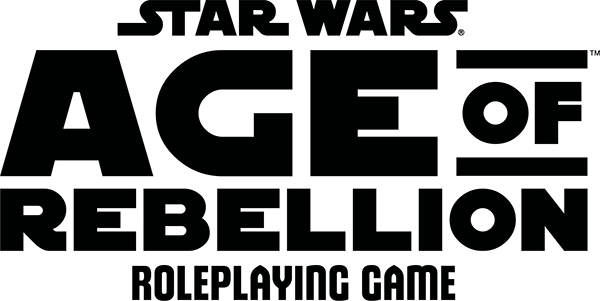 In the Age of Rebellion roleplaying game, you’re part character, part storyteller, and part improvisational actor. You simultaneously create and play through fantastic Star Wars stories, filled with action, suspense, drama, and combat. Your character takes on more than a few stormtroopers, bounty hunters, and Imperial villains. in Age of Rebellion, you play bold characters in their bid to overthrow the repressive, authoritarian, Galactic Empire and its evil Emperor. To play the game, you need your imagination, one of the below pre-generated characters, paper, and a pencil, some Star Wars Roleplaying Dice, and several other players. 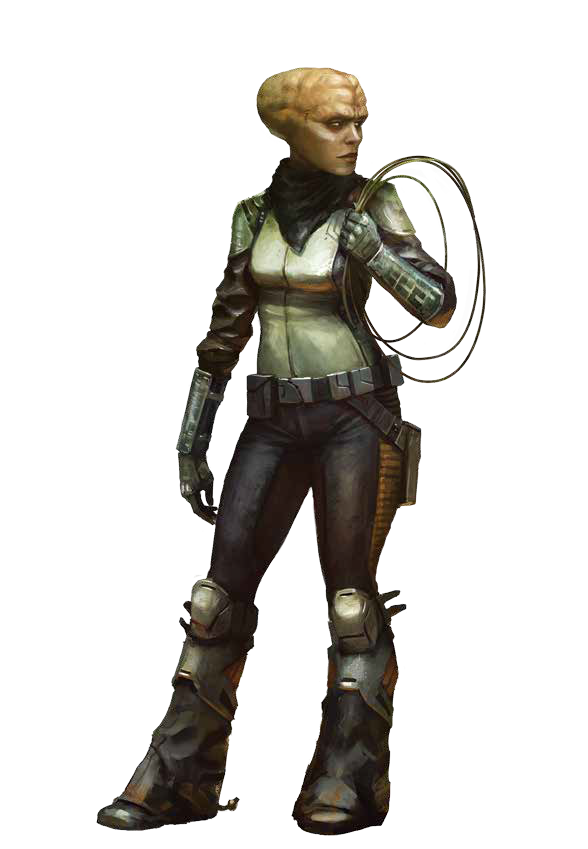 Wohanna grew up on a backwater world of Dressel. She was raised on a farm homestead and was one of the few Dressellian’s comfortable with tech. Growing up on the farm also meant that she was used to dealing with livestock. When the Empire initiated it’s work program to help struggling farmer’s Wohanna’s family were eager to sign up. 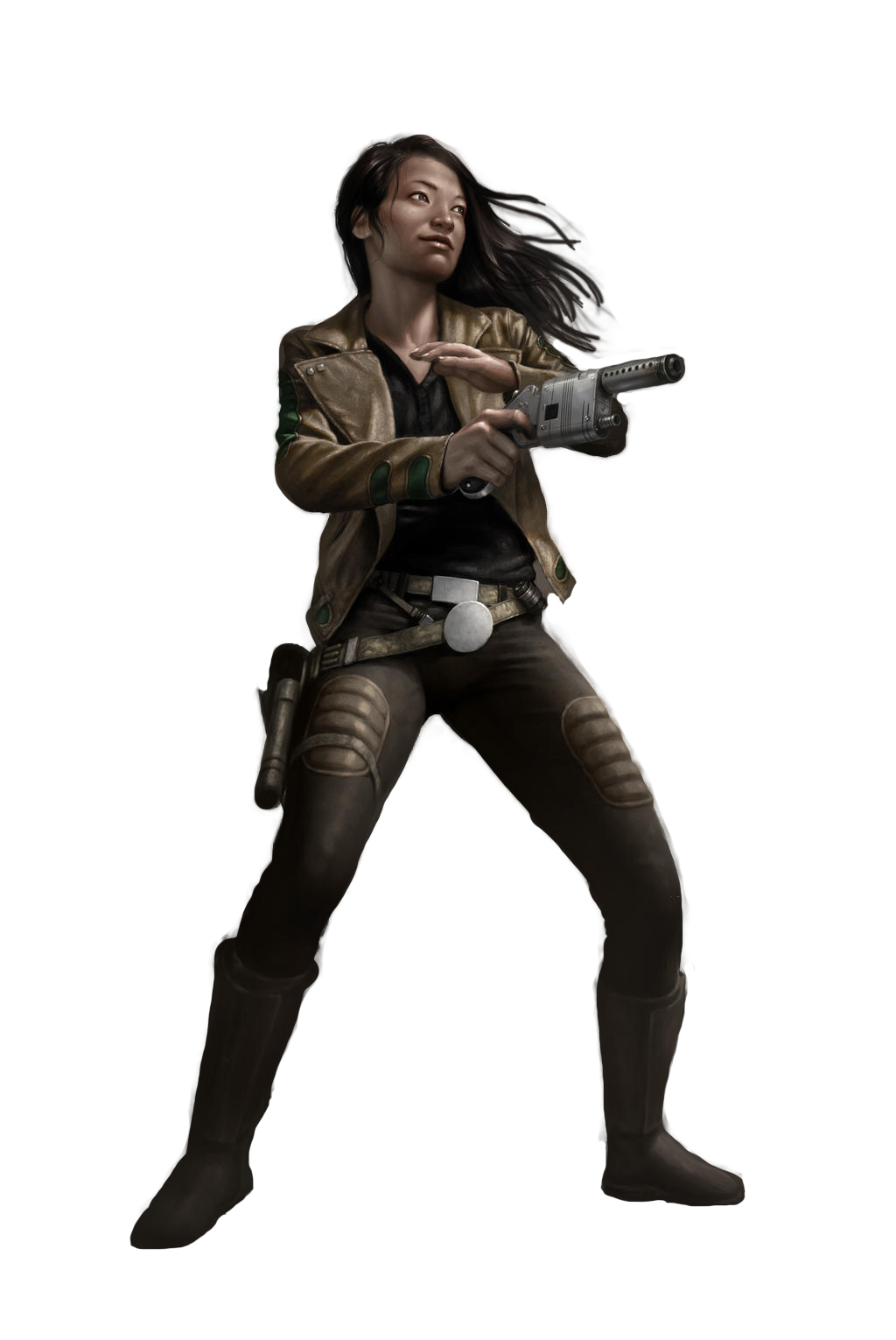 Most people would describe the years since the Galactic Civil War as peaceful; up-and-coming smuggler and junkrunner Mhar’li just describes them as boring.

Morn just after the establishment of the New Republic and the fall of the Empire, Mhar’li grew up on Ord Mantell. Raised on holovids, tales of adventure, and accounts of the high heroism of the plucky Rebel Alliance in the face of the Galactic Empire, Mhar’li lied about her age and enrolled in flight school as soon as she could. 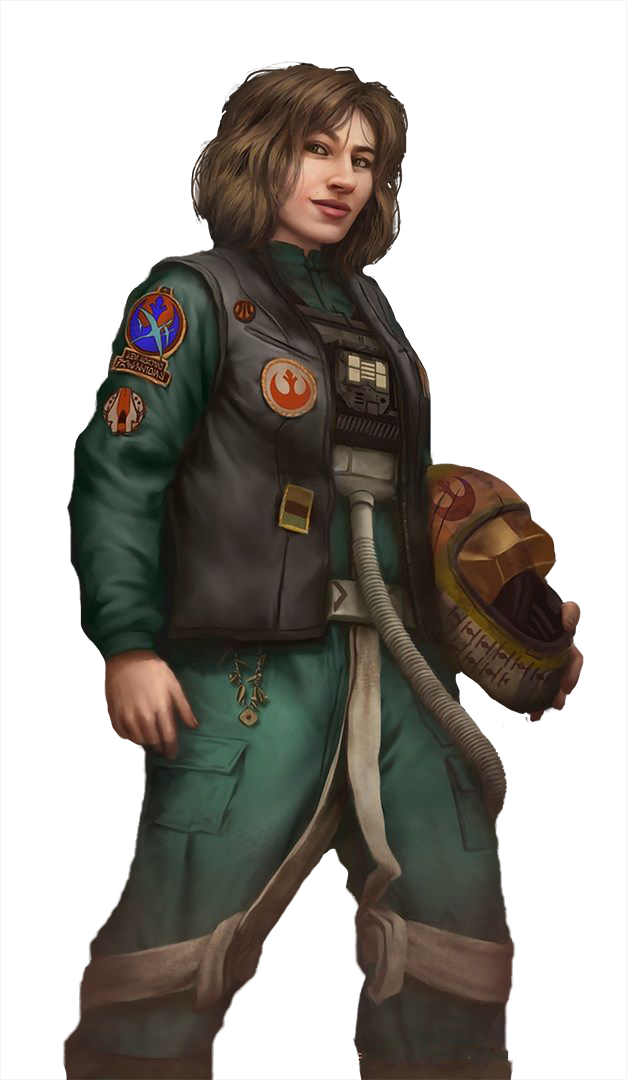 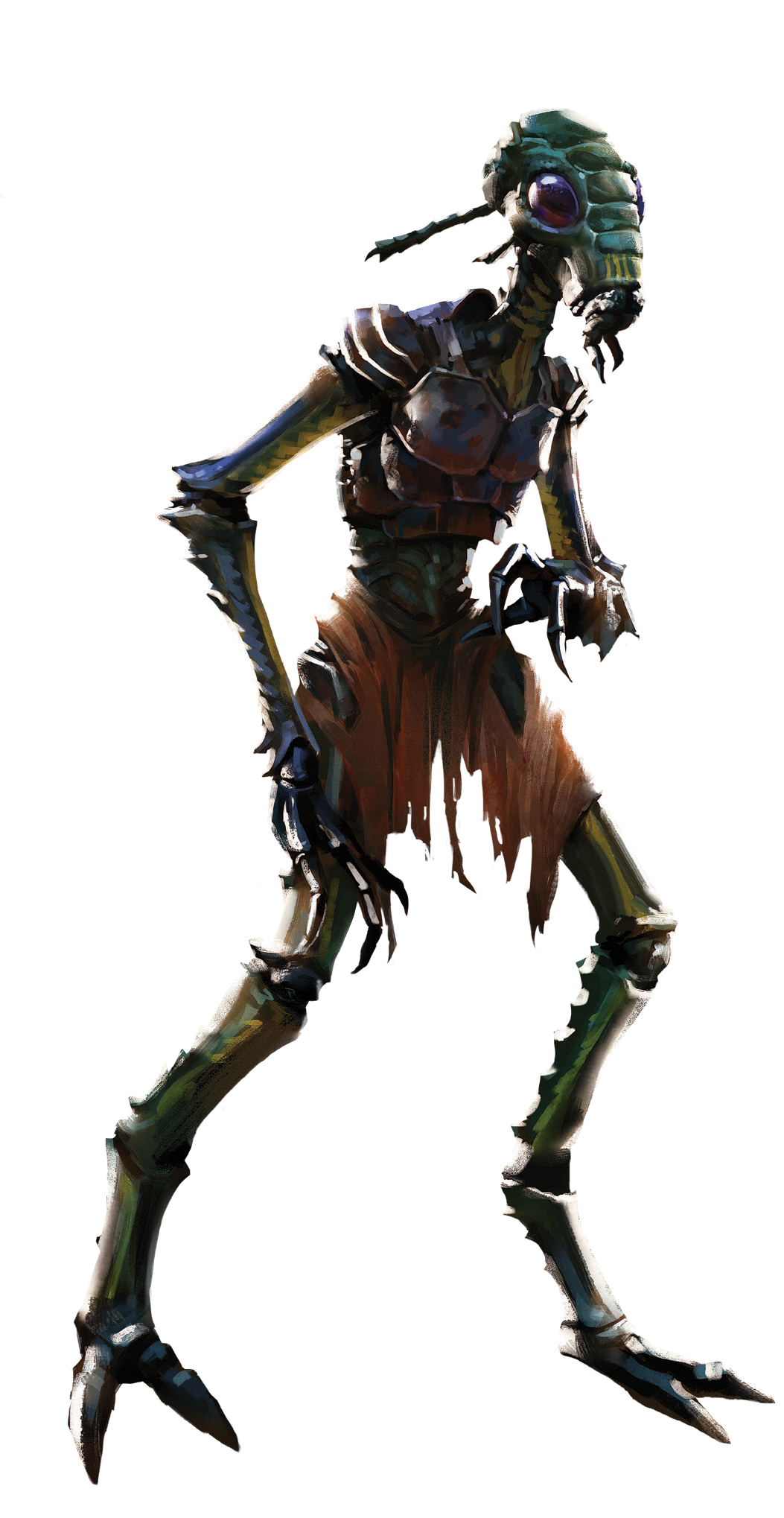 Lask fights to rescue her clutchmate Fzarr, who vanished during an Imperial raid on the station where they once lived together. Fzarr’s research into crystaline substances made him a person of interest to both the Empire, who Lask fears captured him, and the Rebellion, with whom Lask has allied as she pursues her search. 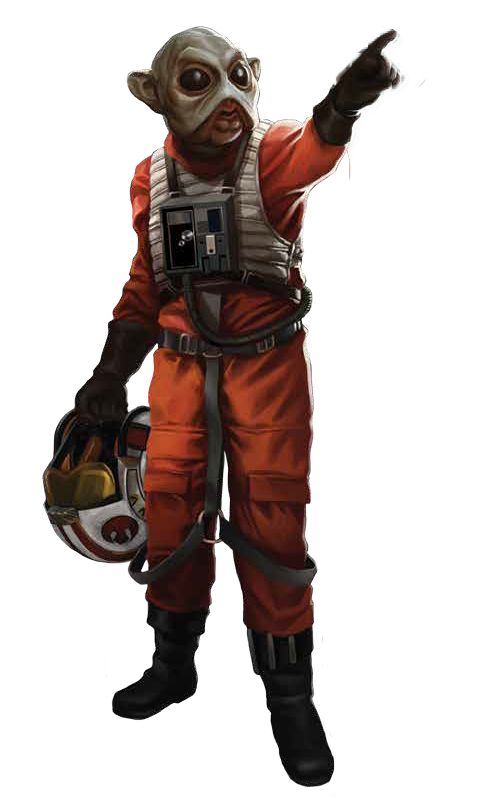 Dero is a new recruit in the Rebel Alliance. He was a local swoop pilot on his home world and uses his skills on the track to master the fight of a starfighter. Now Dero serves for the Rebel Alliance as a pilot in the rebellion. 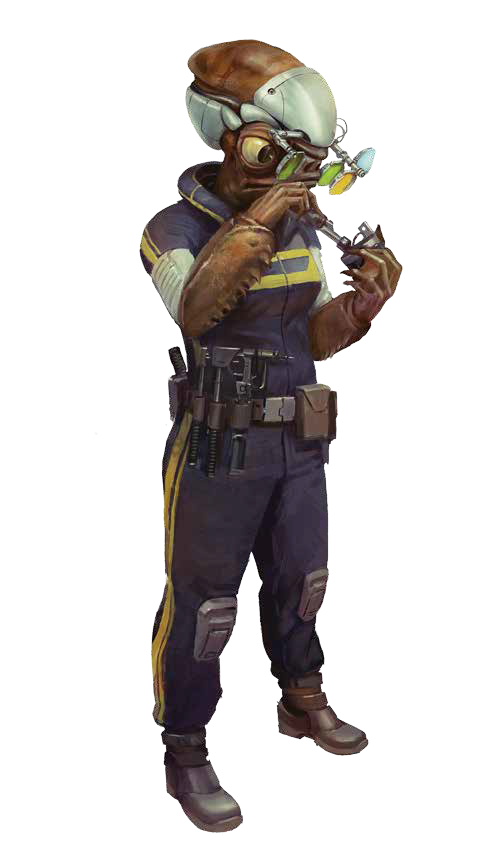 Pala grew up on the Mon Calamari homeworld of Dac. Her childhood was spent under Imperial occupation. She lived deep under the seas. When the Mon Calamari liberated themselves from Imperial Occupation she quickly traveled to the surface and joined the Rebel fight. She believed that single piloted snub fighters would be the way to take down Imperial Star Destroyers as they were too small to be targeted. She also felt that the Rebellion then needed the technological edge in starfighter to starfighter combat. So she tused all of her abilities to modify and ensure that this was the case. She joined Rebel Special Operations to ensure their top operatives had the best starship modifications giving them the edge.

When the Galactic Empire attempted to cross the Mon Calamari people and lost Beck was emboldened against the Empire. He now serves his people valantly as a Commander of one of the Rebellion’s Capital Ships. However, he has a tendancy to leave his command ship to go on away missions as he hates to be stuck and bored in one place for too long. This resulted in him being given a smaller Mon Calamari Cruiser as his command vessel.
Click Here 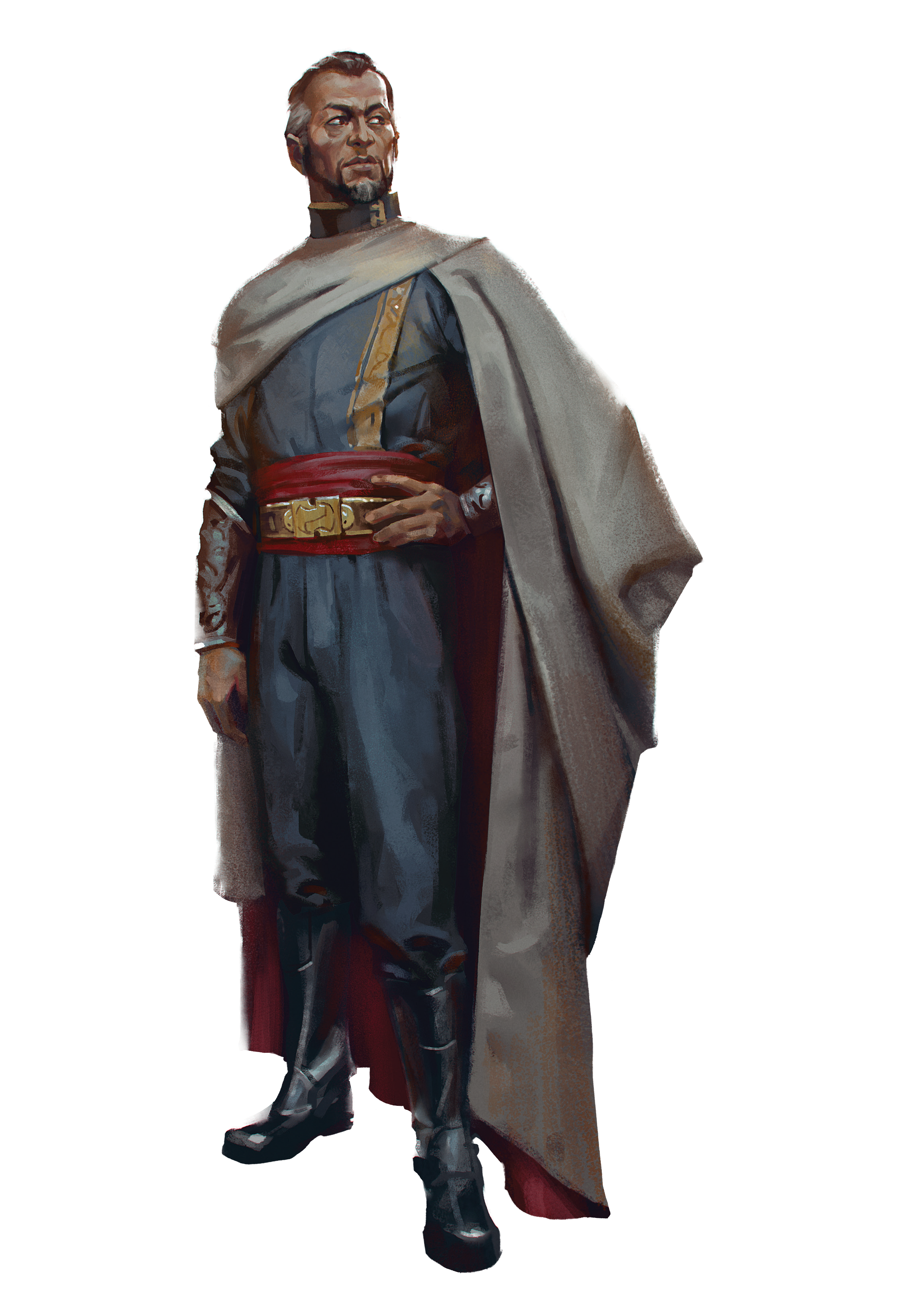 Fernus Rombus of House Pelagia was a Tapani Noble and a Saber Rake in his youth. His house were strong supporters of the Jedi Order and when the Empire seized power and executed Order 66 many in the House Pelagia who had bloodline ties to the Jedi were rooted out and eliminated. After many Imperial reprisals against his people the enemy and rival of House Pelagia, house Mecetti performed the Mecetti Purge on the people of Pelagon.
Click Here 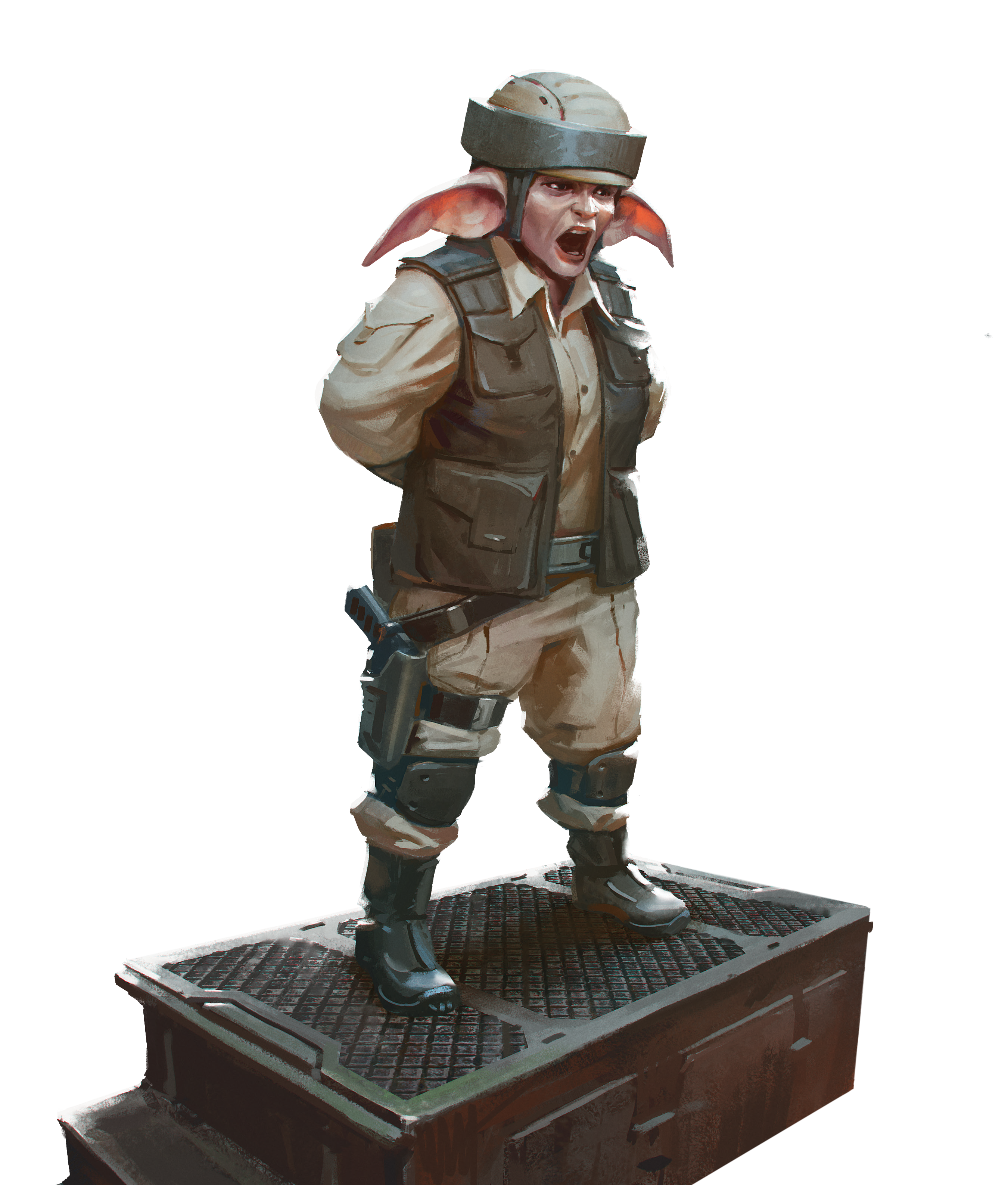 Korva is a loud and powerful instructor who despite her large drooping ears, often has an intimidating look about her.
Click Here

Some years ago, Perfip was a bounty hunter who worked alongside an Imperial task force facing pirates in the OUter Rim. During that time, Perfip befriended Nalida Som, a talented Imperial tactician. The two parted as comrades and even friends, but the Empire’s cruelty eventually pushed Perfip to join the Rebellion. He fears seeing Nalid’s ship on any battlefield-only partly because of her tactical prowess.
Click Here 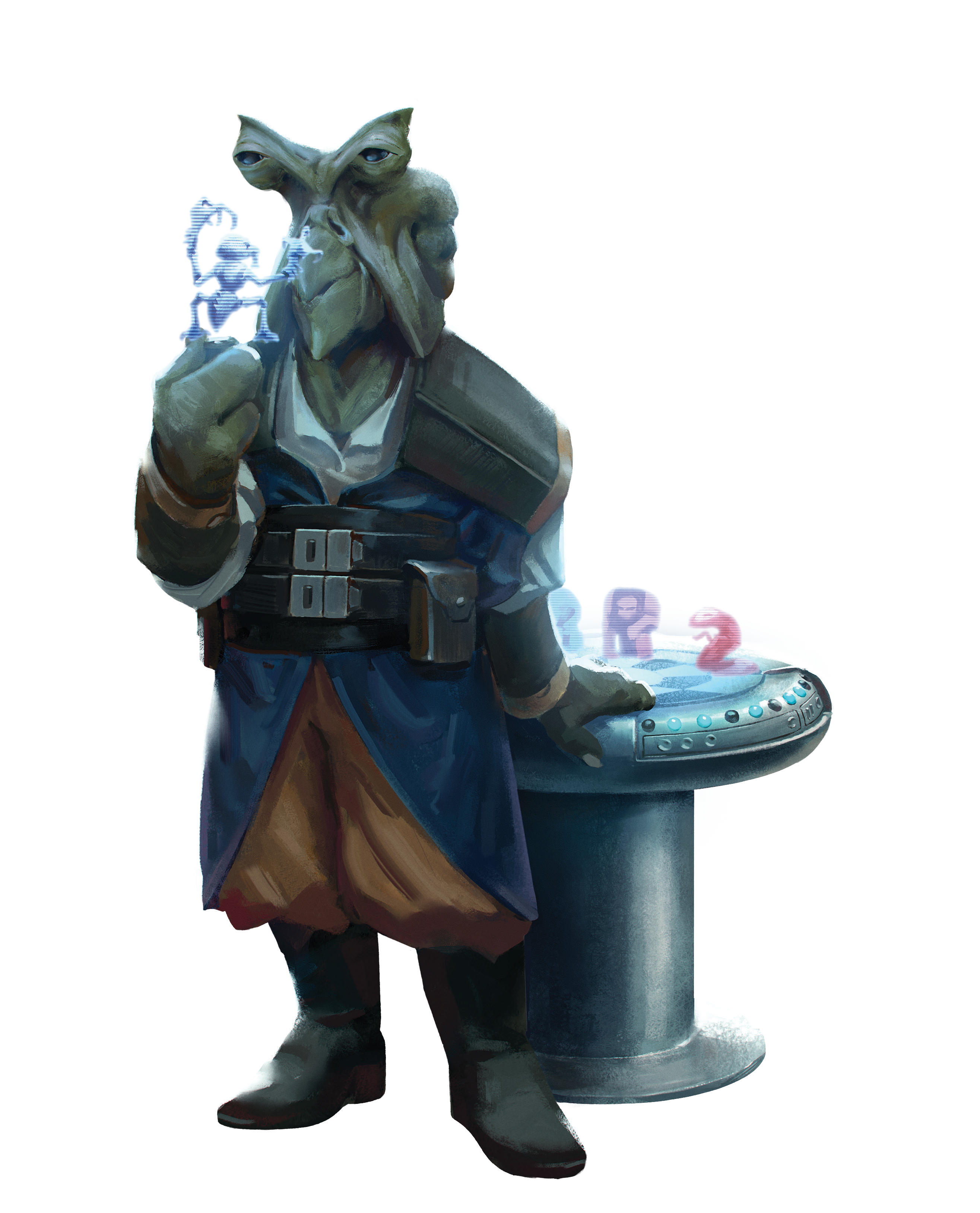 Volk Tubini always has a smile on his face. This mischevious grin is because he knows he always has you right where he wants you, for life is but a game of dejarik.
Click Here 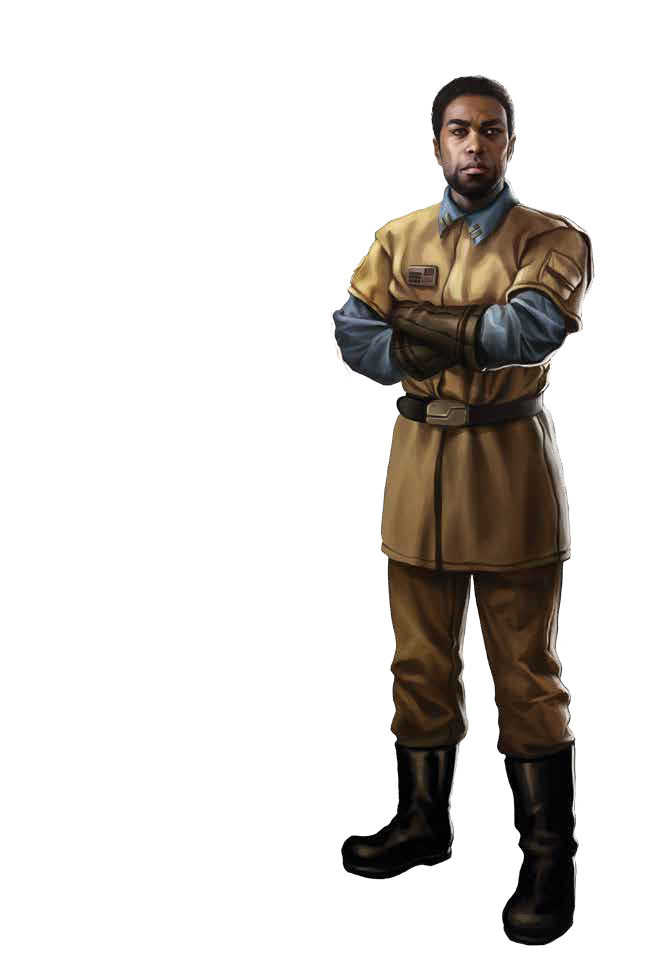 Lt. Jaxon is well groomed and maintains a short gotee.Humans start the game with one rank in two different non-career skills of their choice 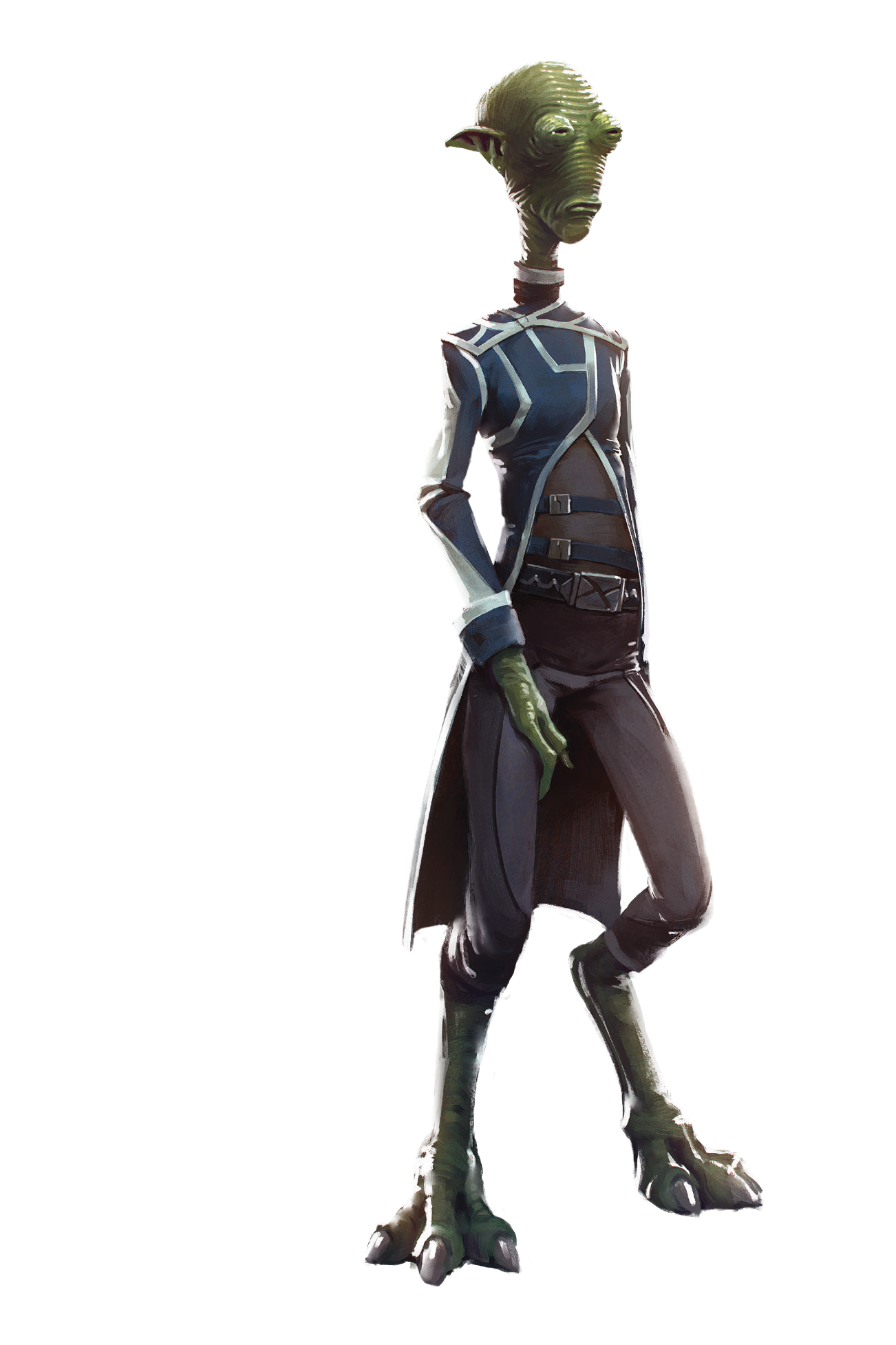 Bal grew up in high society. He served in the Galactic Republic as a junior Senator’s aid. That was until the Empire…
Click Here

Jin-Rio is an attractive idealisting young student. She wears her hair in a long braid.Humans start the game with one rank in two different non-career skills of their choice.

Gorbeck has a lazy eye with his middle eye stock.Gran may take one rank in Charm.When making ranged combat or Perception checks, Gran remove up to imposed due to environmental conditions or concealment (but not defense). 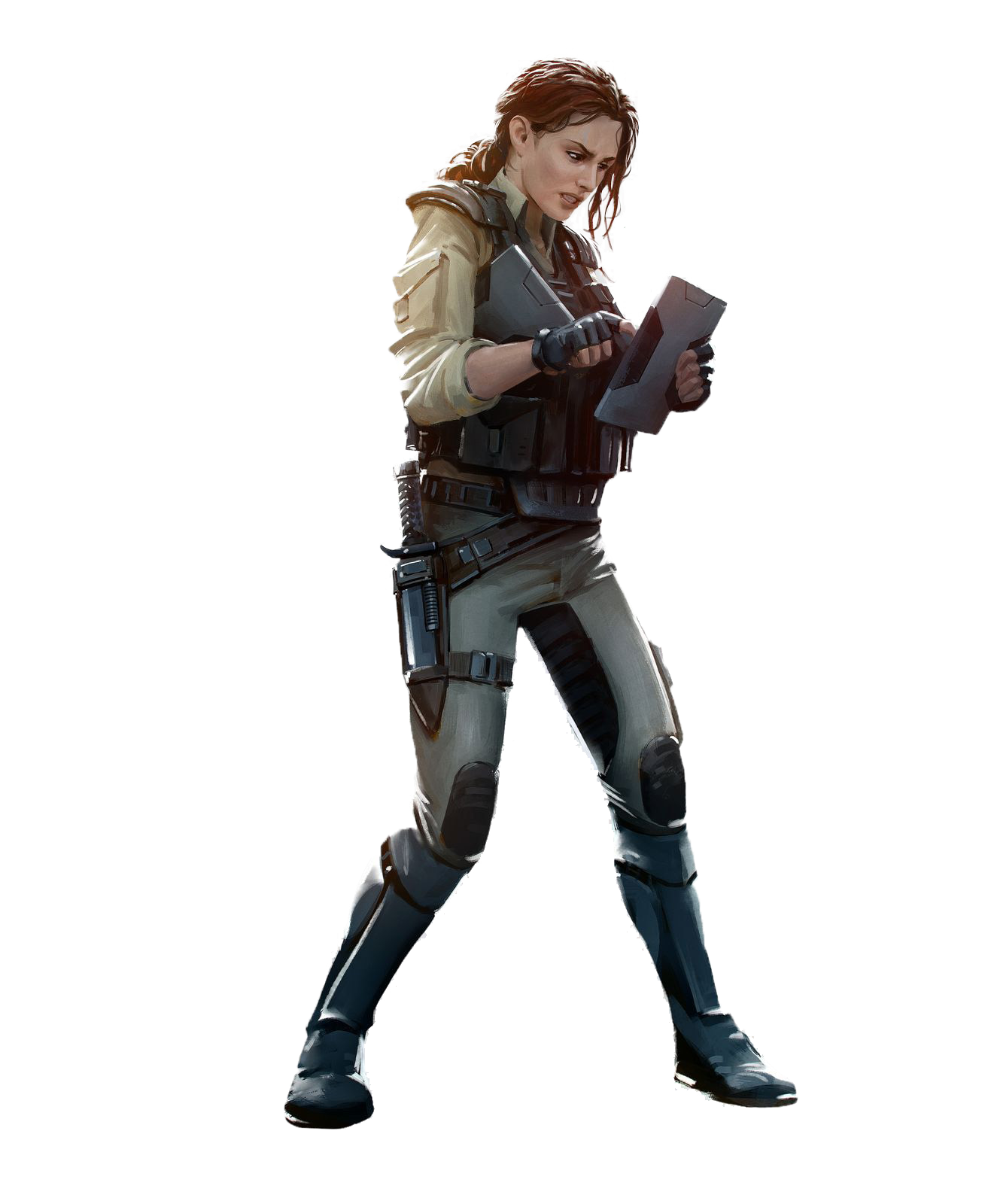 The recluse tech genius known as Gara Ramis has always been a bit of a loner. Growing up she felt no one really understood her except her books and data pads.
Click Here 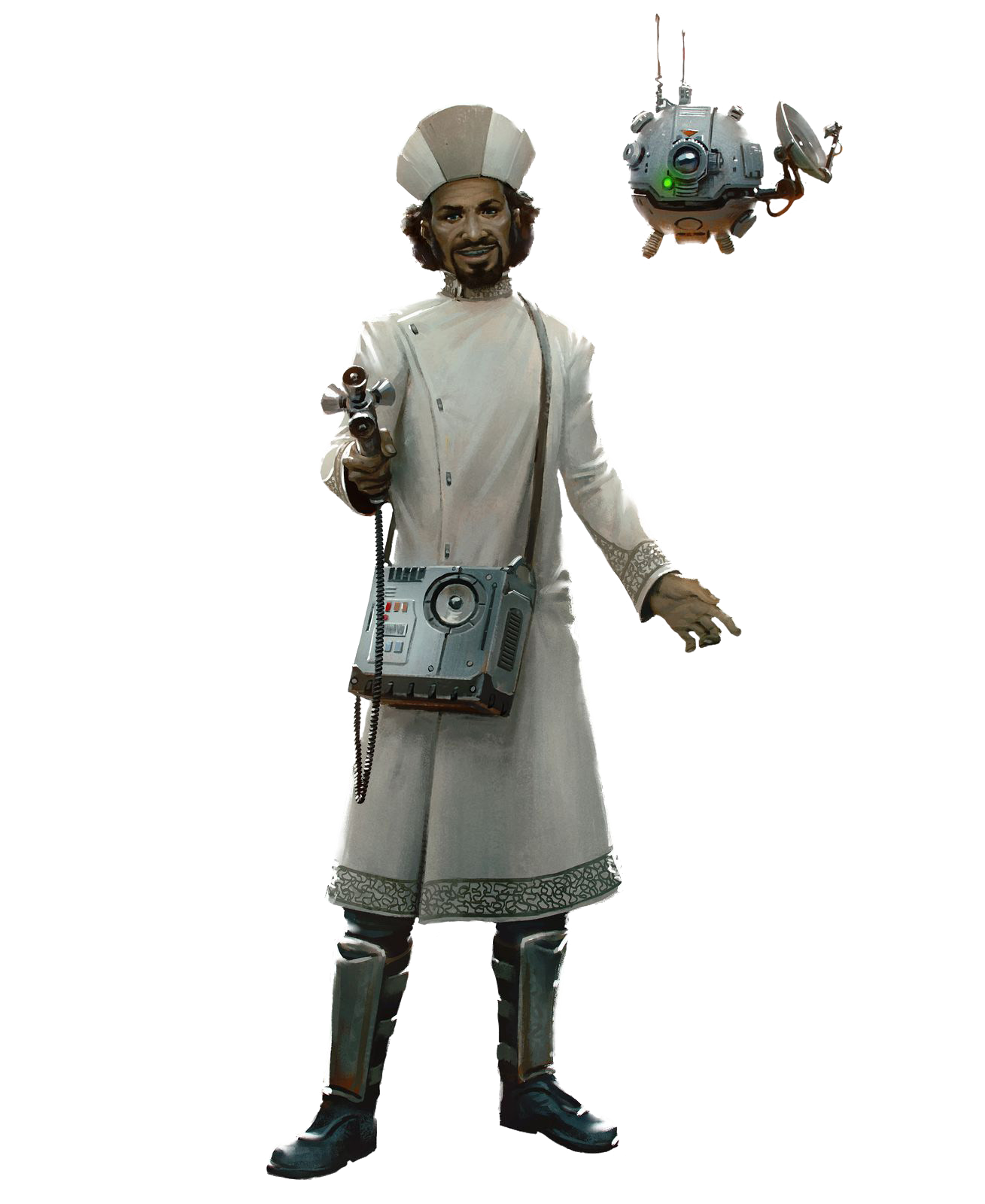 Barkov Cristi was a Holonet Newsnet reporter who covered the Imperial Senate. He lived and worked on Coruscant and did many pieces about various Senator’s. He built a strong relationship with several Senators. When the Empire disbanned the Imperial Senate putting direct control in the Moff Governor’s Barkov was devistated.
Click Here 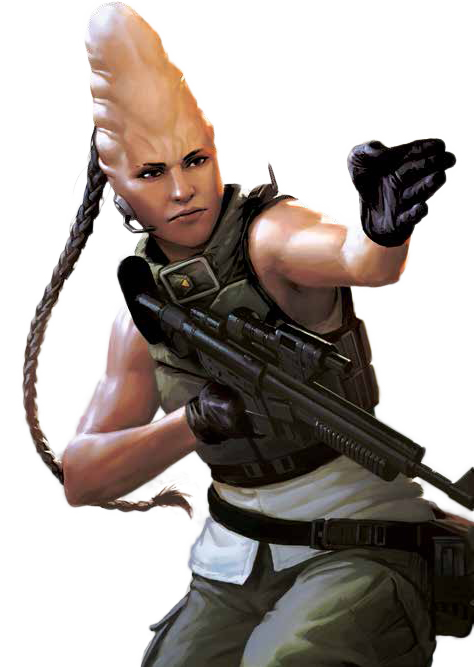 Ko-Tun has a youthful face and one would not expect her to be the Rebel type. She wears a long braid that extends from the top of her conned head down past her waist.
Click Here 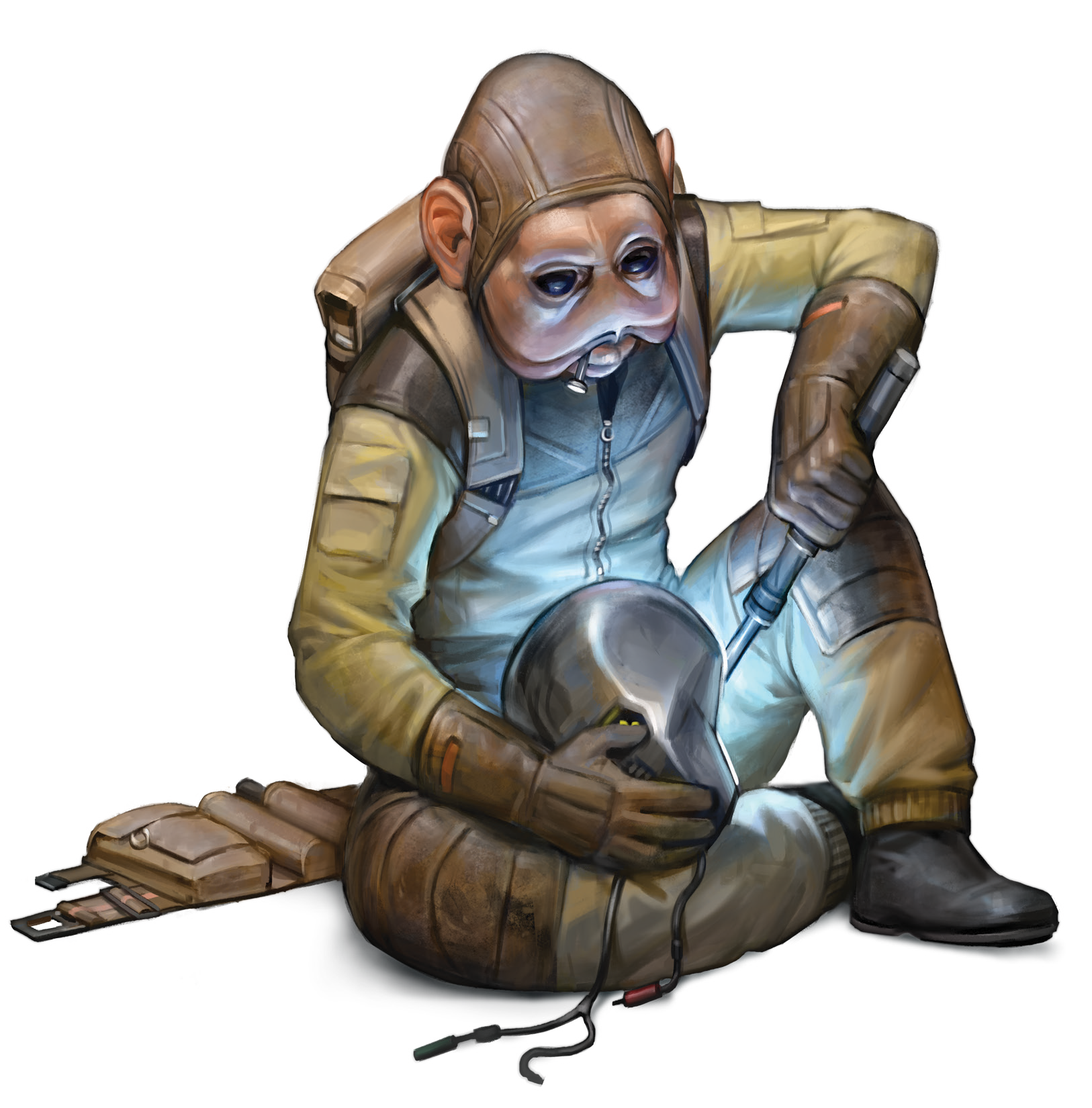 Dura grew up in the caves of Sullust and always had a knack with tinkering with droids. When he was 10 he built, Thomp, his companion pit droid. He and Thomp were well known as a comical bunch and the go to when your droid needed repair, reprogramming, or a good old memory wipe. It was his comfort with droid technology that attracted Rebel Agent “Tiree.”
Click Here 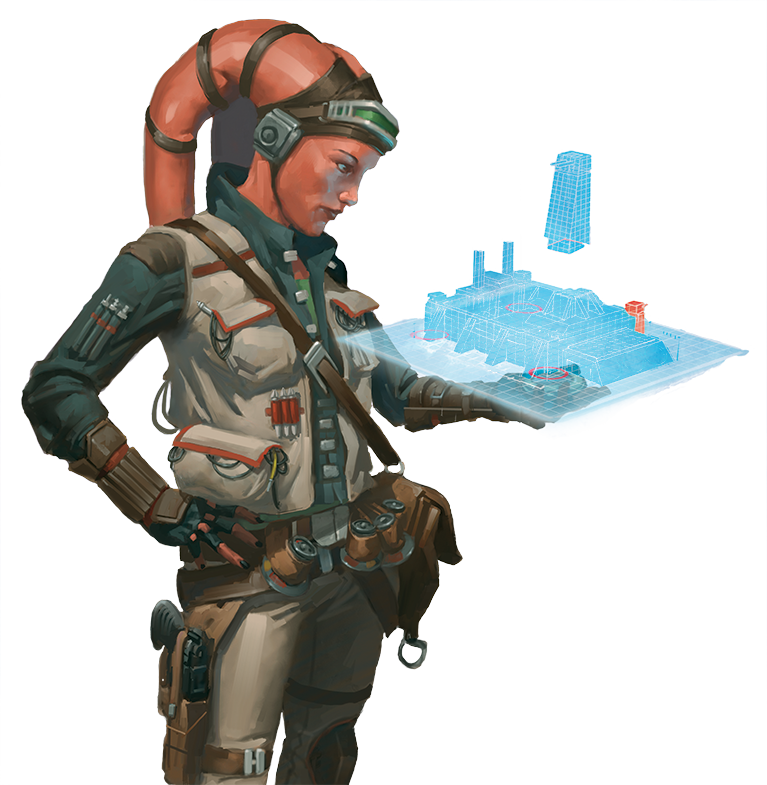 Growing up in the under ground cities on Ryloth, Bytlived a sheltered life. Her father one of the local magistrates would never let her go out. So she stayed at home and studied. This resulted in her becoming very talented with technology. However.one can only be constrained for so long.
Click Here

Droids do not need to eat, sleep, or breath, and are unaffected by vacuum, toxins, and poisons. 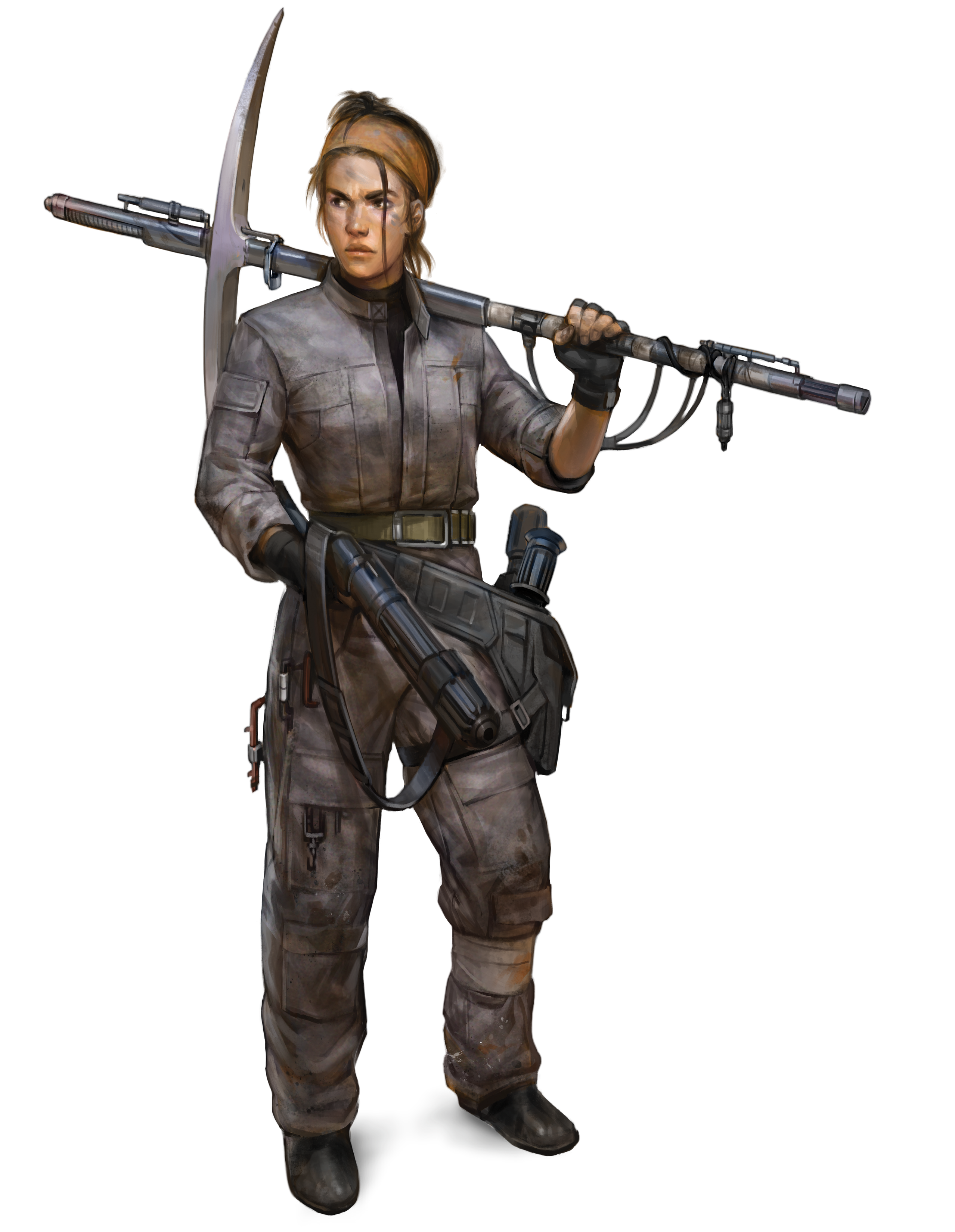 Rachel usually is found with a headband keeping her hair out of her eyes and a bit of grease smudged on her face.
Click Here 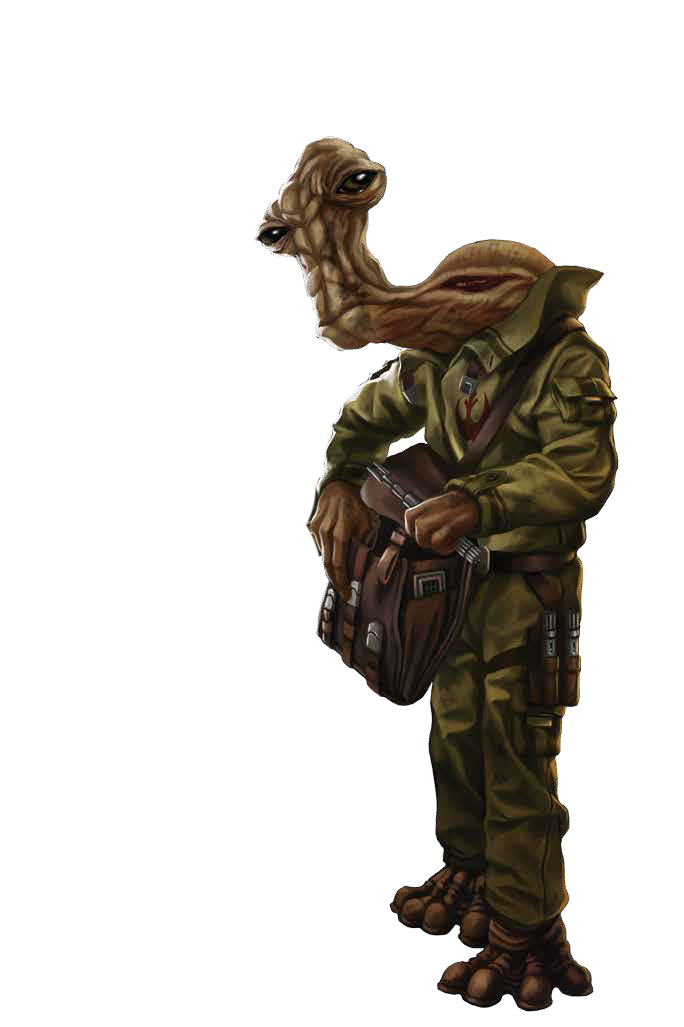 Fren has some burn marks on the left side of her face.With two mouths and four throats, Ithorians have a unique natural weapon they can call upon when threatened. Each time the Ithorian uses this ability, he suffers 3 strain 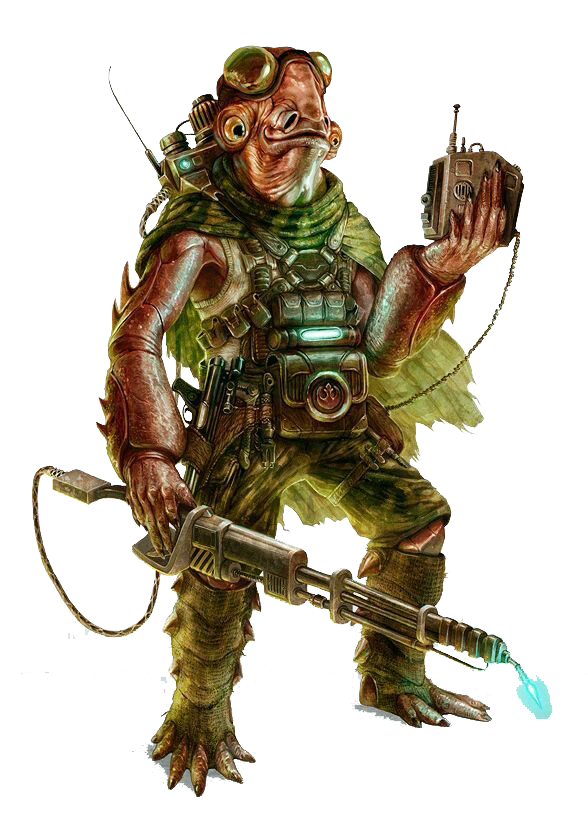 Arina grew up on the harsh environments of Onderon. She served Saw Gerrara in his war against the Empire and has a grim outlook on the Empire and how it has affected the galaxy stopping it from growing, flourishing, and reaching its potential. She joined the Rebellion after the destruction of Jedha to continue her fight to bring down the Empire.
Click Here 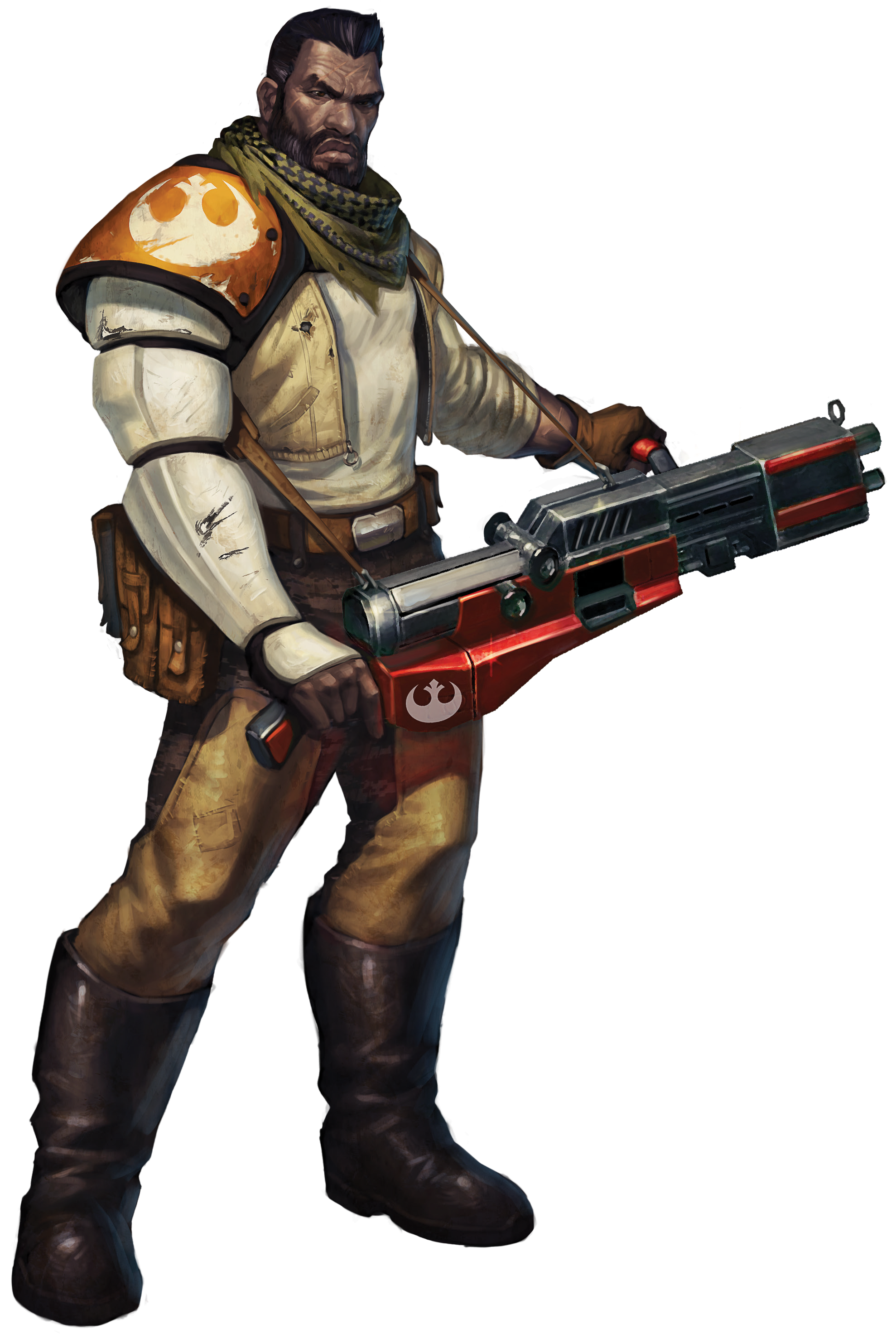 Biv Bodhrik joined the Rebel Alliance during the Galactic Civil War as a guerrilla fighter and eventually rose in the ranks, being driven by a thirst for vengeance for something that happened in his past relating to the Galactic Empire. He eventually was sent to Tatooine to find Han Solo and investigate rumors of a growing Imperial presence on the planet, working together with the engineer Saska Teft.
Click Here

Nessia Anic fought during the Clone Wars on the side of the Seperatists. She was a combat medic who would fight on the front lines and heal the wounded.
Click Here 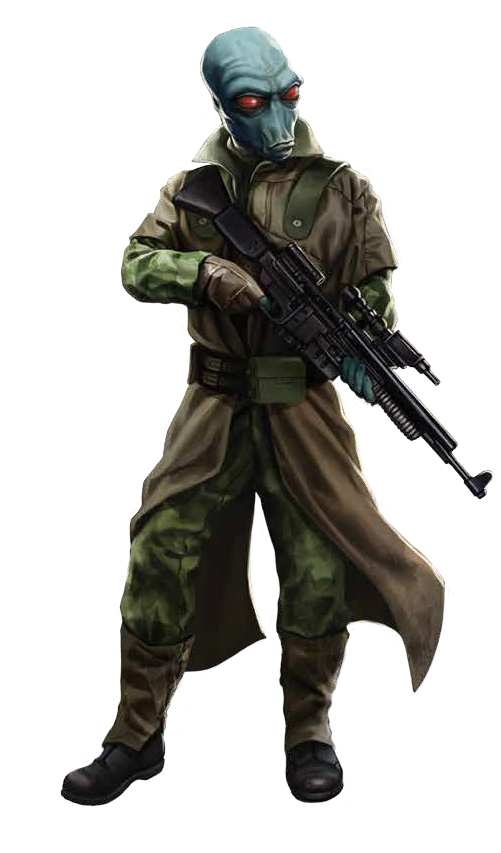 Doleth has a very stern look to his face.Add :e^: to all Astrogation checks. 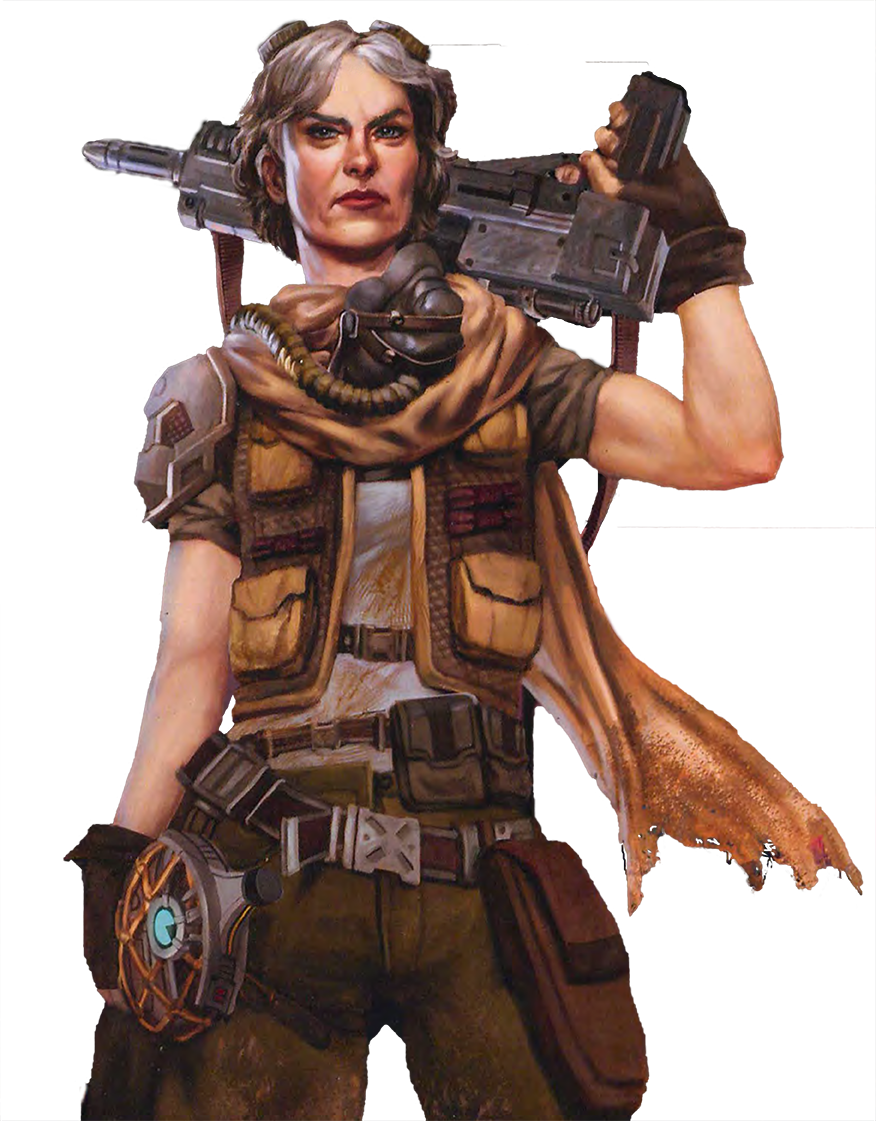 “Join the Republic, protect the galaxy!” These are the words that lured the young, idealistic Fira Bon into the New Republic military, and years later they were the words that she would remember with disgust when she left.
Click Here 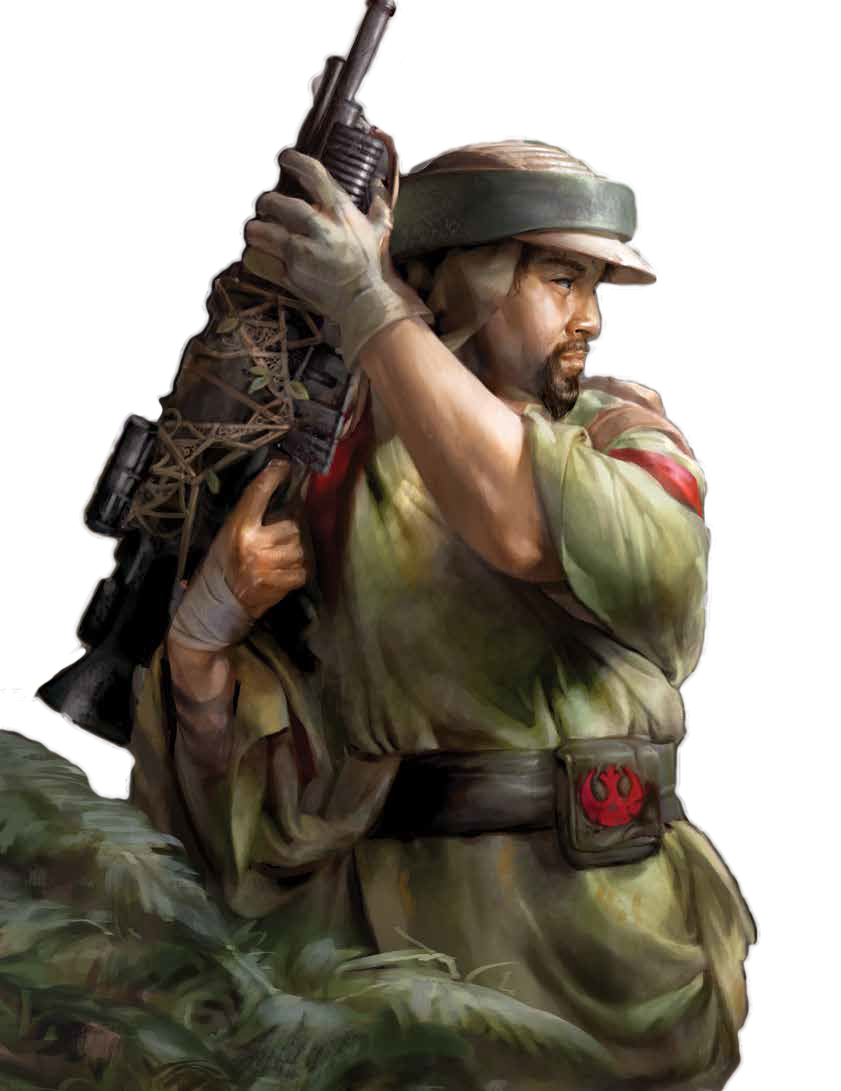 Cael of House Hanarist had it all. He was born into one of Alderaan’s noble Houses and could have lived a life of easy leisure. In a sense he did, if one defines leisure as becoming one of Alderaan’s foremost athletes and one of the fastest limmie players and even more a ball across the field.
Click Here 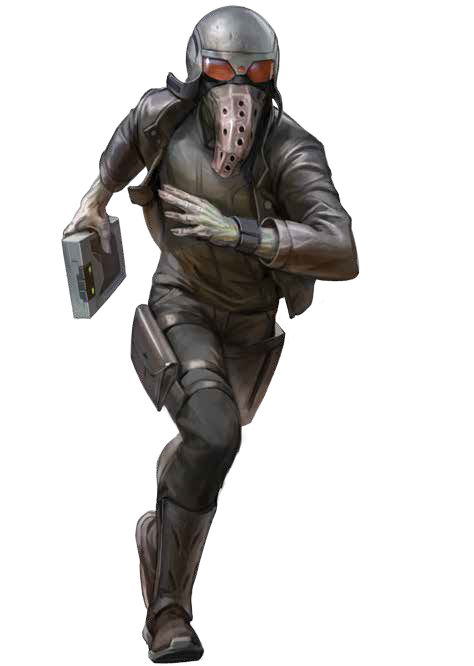 Schutz like many Imperial citizens was ok with keeping his head down and letting the Imperial Flags reign supreme. He did not wish to attract too much attention.
Click Here 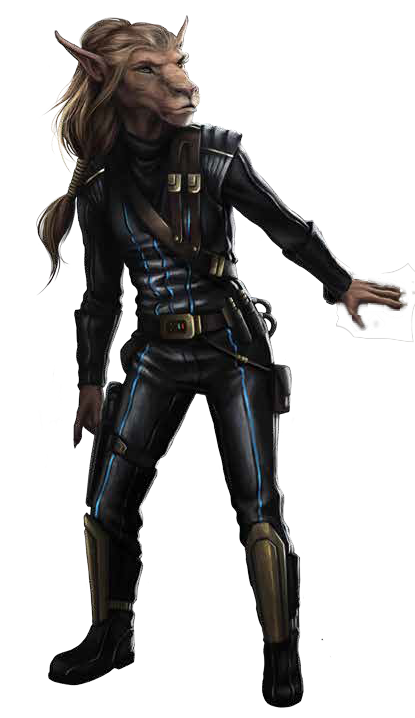 Lelsk is always lurking in the shadows silently to cover up the lisp she has when she speaks. 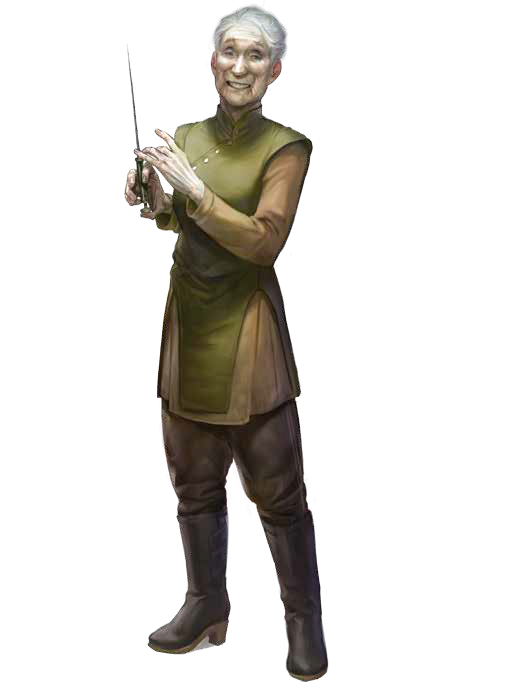 Madame Ch’o is a frail looking old woman who seems very kind. She usually has several butterscotch candies in her pocket. She is kind, until you discover her dark secret.
Click Here 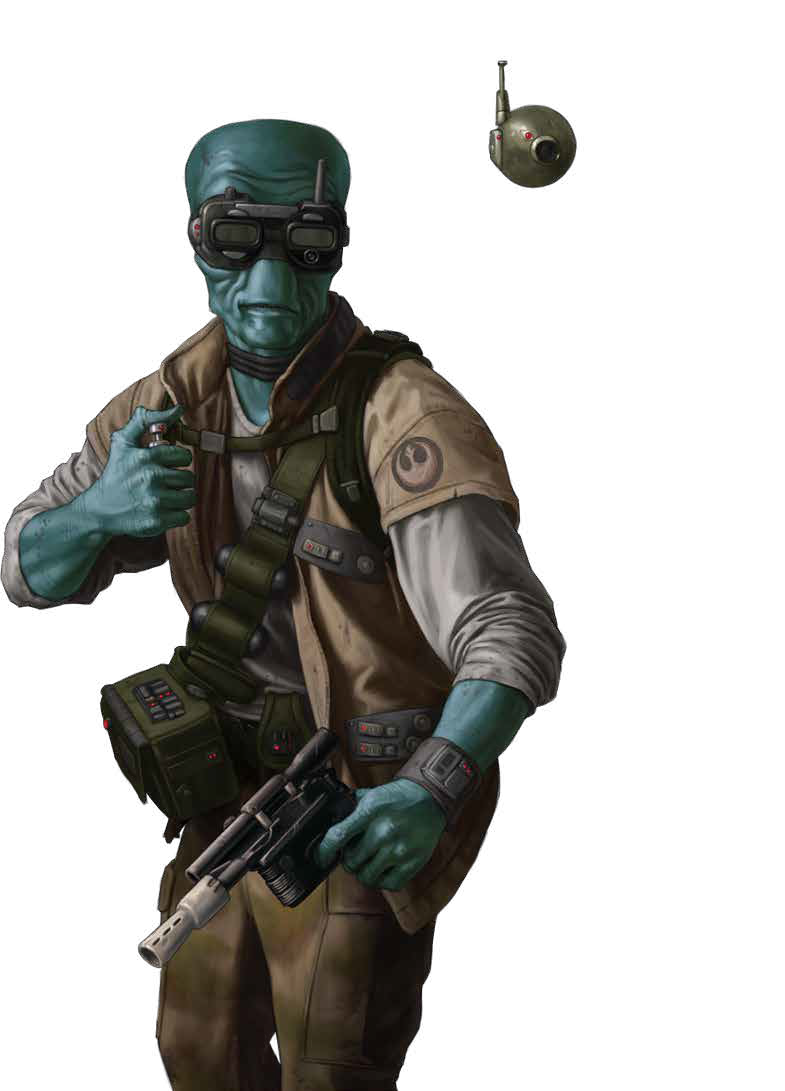 Vendri always wears his eye mask to cover the fact that he is blind in one eye.Add :e^: to all Astrogation checks. 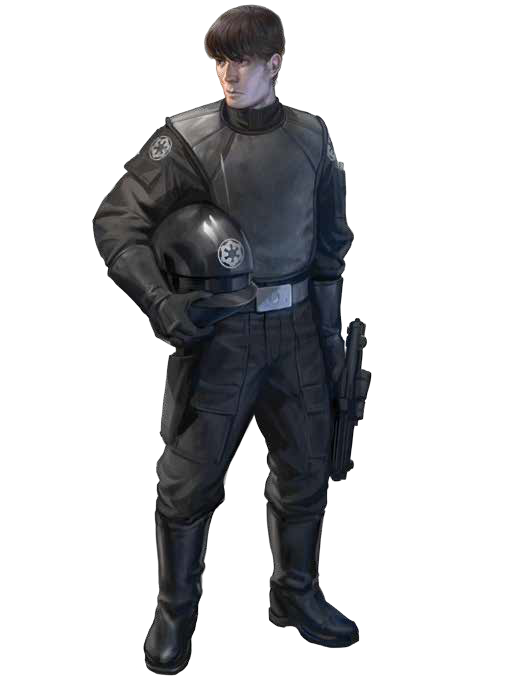 Jordun was once a data analyst for the Grand Army of the Republic. He served the Republic and believed strongly in their ideals. When the Republic became the Empire he saw how its ideals were stomped on, crushed, and left in ruin.
Click Here