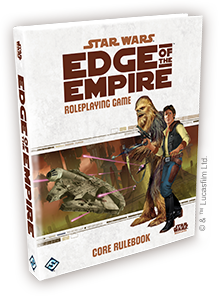 Trouble Brewing is the Adventure in the back of the Star Wars: Edge of the Empire™ Core Rule Book written by Fantasy Flight Games.

Participate in grim and gritty adventures in places where morality is gray and nothing is certain. Ply your trade as a smuggler in the Outer Rim, collect bounties on the scum that live in the shadows of Coruscant, or try to establish a new colony on a planet beneath the Empire’s notice.

In the Star Wars Legends of the Galaxy storyline, Players have recently completed the Enemy of my Enemy 3 part and One Shot First 6 part Storylines.  The Players have been working for Muraga the Hutt of the Besadii Hutt Kajidic and Ranem “The Glove” Tiiv a Black Sun Vigo.  Players who participated in this story line begin Trouble Brewing delivering a shipment of specially refined Tempest Spice to a Xexto underworld contact of the Besadii Hutts.  This contact will use the Spice on an attack against Bargos the Hutt in the future.  This will be seen play out in Debts to Pay as it will be used by the Gamorrean Guards who attack Bargo’s Palace.  This is part of how Black Sun and Muraga move to encroach on territories controlled by the Desilijic and Gorensla Hutt Kajidics on the planet of Formos.

Muraga wants our HEROES to meet with a contact, Fen Droll, a Xexto mercenary.  For delivering the Spice Shipment to Fen Droll he will provide information on an astromech droid filled with some of the best astrogation navigational data in the galaxy.  Ranem “The Glove” Tiiv wants this information in order to further his goals of encroaching on Hutt Space and furthering the Tempest Trade.  Unfortunately, all attempts to reach Fen Droll fail and players may assume that he fell afoul of Bandin Dobah a local pirate working for the Desilijic Hutts, specifically one Teemo the Hutt.  The PCs head to the cantina to meet their contact only to have the contact not show.  Asking around the PCs learn from the Bith owner of the Rii Jenks Cantina a rumor which suggests Bandin Dobah’s involvement.  Upon leaving they discover a damaged protocol droid with clues to a missing astromech droid possibly the droid they are looking for.

If you have players new to Legends of the Galaxy then the PCs are simply hired by Muraga the Hutt to make this delivery possible and to locate the droid.

Hutt in Charge:  In Trouble Brewing there are several optional encounters at the beginning of the adventure which GMs are encouraged to have the PCs encounter.  The big Hutt Gangster on Formos is Bargos the Hutt of the Gorensla Hutt Kadijic.  This is a good way to foreshadow the presence of the Hutt which will be a payoff later in Adventure 13 Debts to Pay.   When the PCs arrive in Formos you can note that the buildings are all smaller one story buildings.  Only a bar known as the Trandoshan, Bargos the Hutt’s Palace, and the Imperial Outpost are the taller buildings in the city.

A Deal Gone Wrong:  The PCs arrive at the designated place to meet with Fen Droll the Xexto Mercenary.  Unfortunately he does not show leaving the PCs with a cargo of highly illegal Tempest on their hands and no astrogation data for Ranem “The Glove” Tiiv.  The PCs can attempt streetwise checks and discover the bounty of Bandin Dobah and suggestions from people that Fen Droll ran a foul of Bandin Dobah.  If the PCs attempt to contact Muraga the Hutt or Ranem “The Glove” Tiiv they will instruct the PCs to search for this droid, hunt down Bandin Dobah, and that they will need to deliver the cargo to a new contact who will arrive shortly to carry out the Tempest operation against the Gorensla Hutts.

Turning in the Bounty: If the Players are unsure which party holding a bounty against Bandin Dobah, The Empire or the Hutts, the GM is encouraged to nudge the players in the direction to bring Bandin Dobah to Kessel and turn him in there.  This will add to the Kessel Run Adventure Series that occurs later in the season.

Did the PCs assist Zukata in the Cantina?  Note the PCs relationship with Zukata and if they shared the hyperspace data with her as this can affect the Kessel Run 3 part adventure.

Did the PCs successfully rescue R4-W9 the astromech droid with the advanced astrogation data in and around the region?  Gaining this reward will benefit the PCs in the Season 1 finally of the Kessel Run Special Event.  Do the PCs intend on delivering the droid back to Ranem “The Glove” Tiiv?

Did the PCs successfully recruit Godon Netakka?  If so he can be taken as a contact.  Or did the PCs end up in combat with Godon Netakka turning him into a rival.  It is important to note this relationship as he returns in the Kessel Run 3 part adventure. 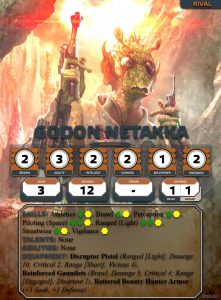 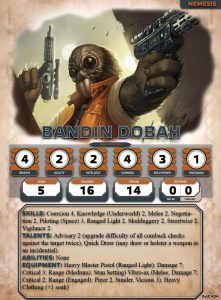 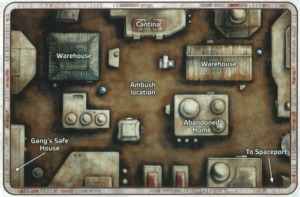 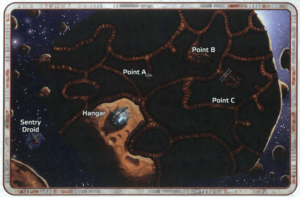 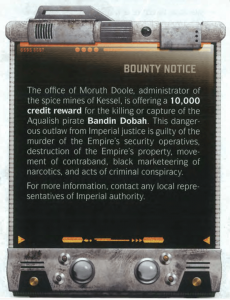 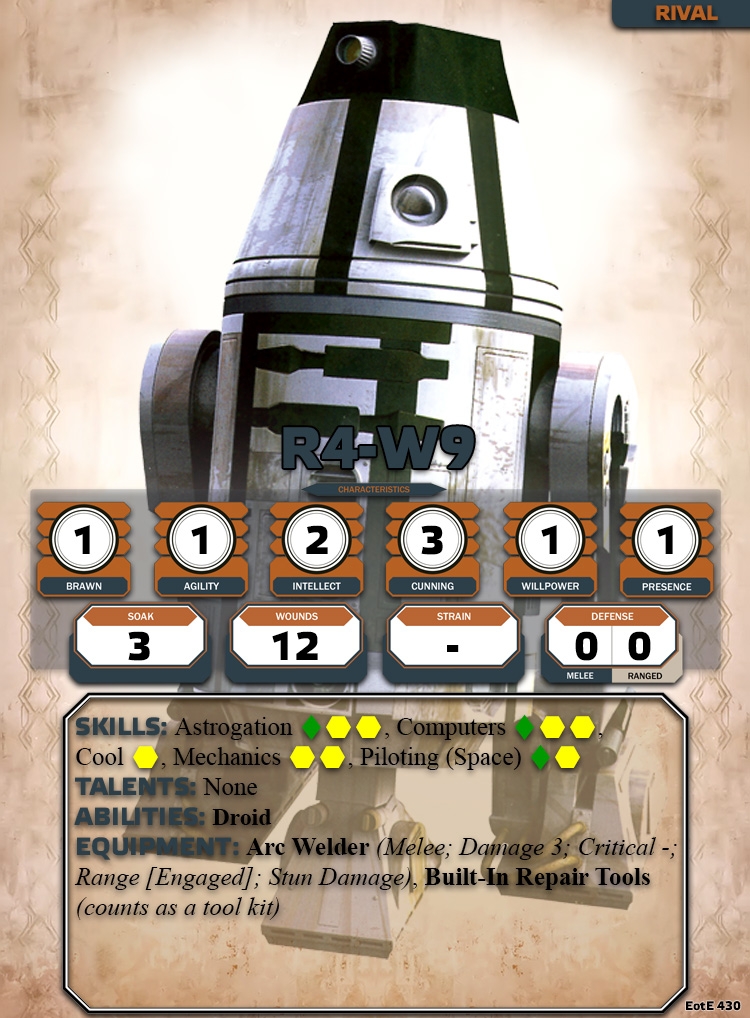 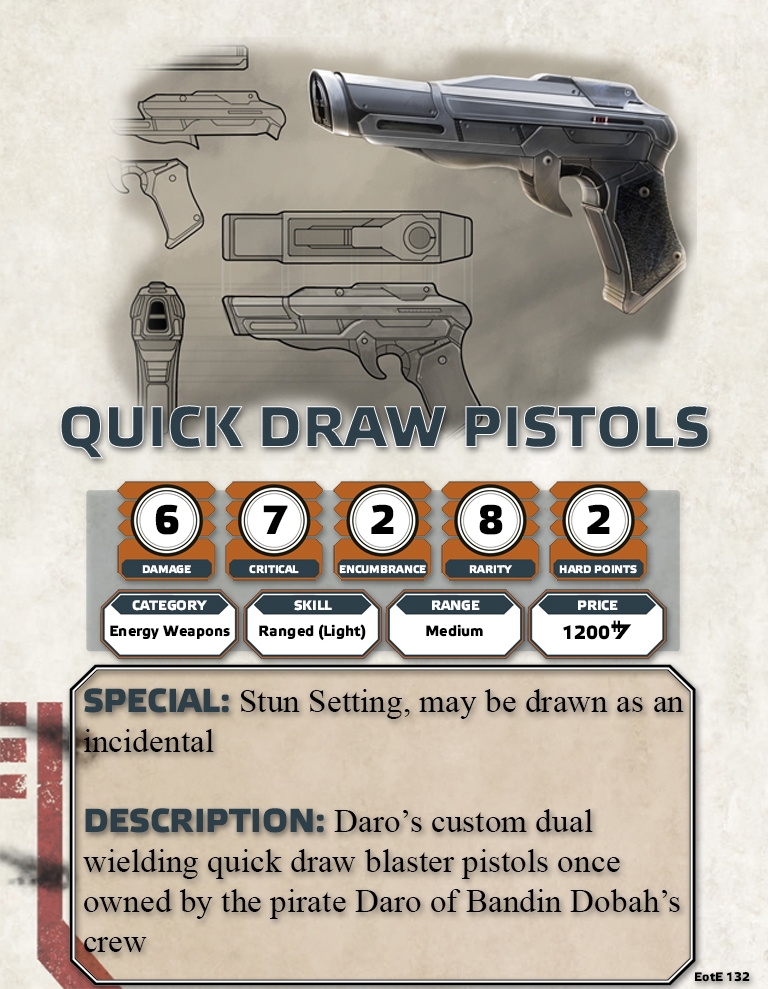 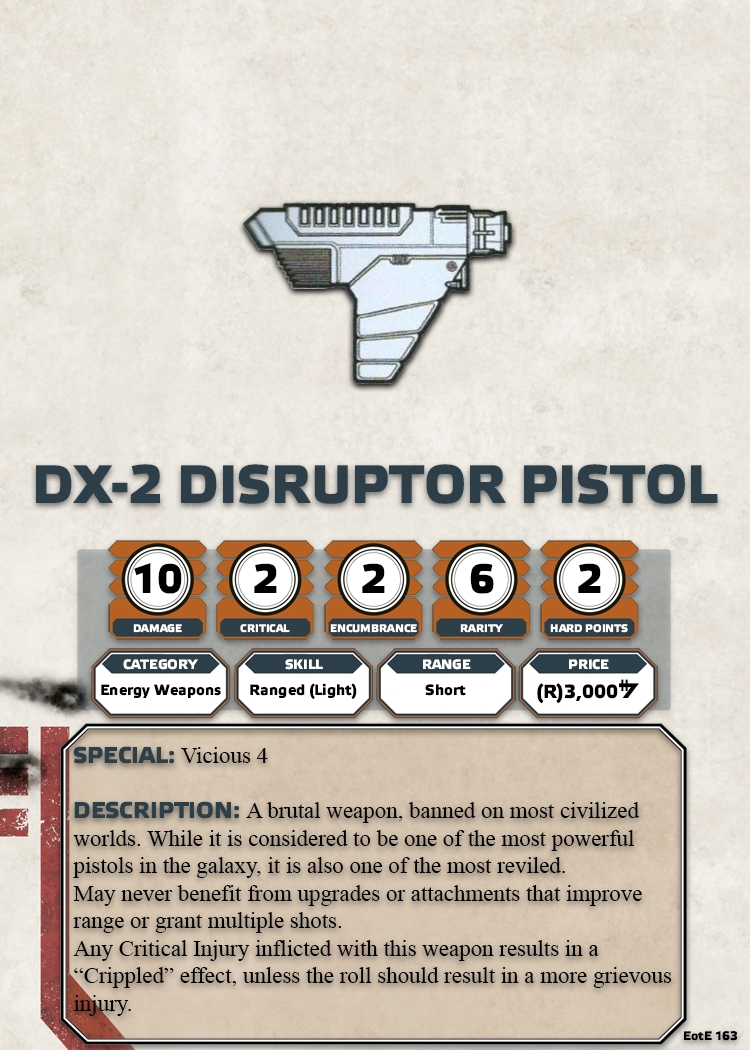 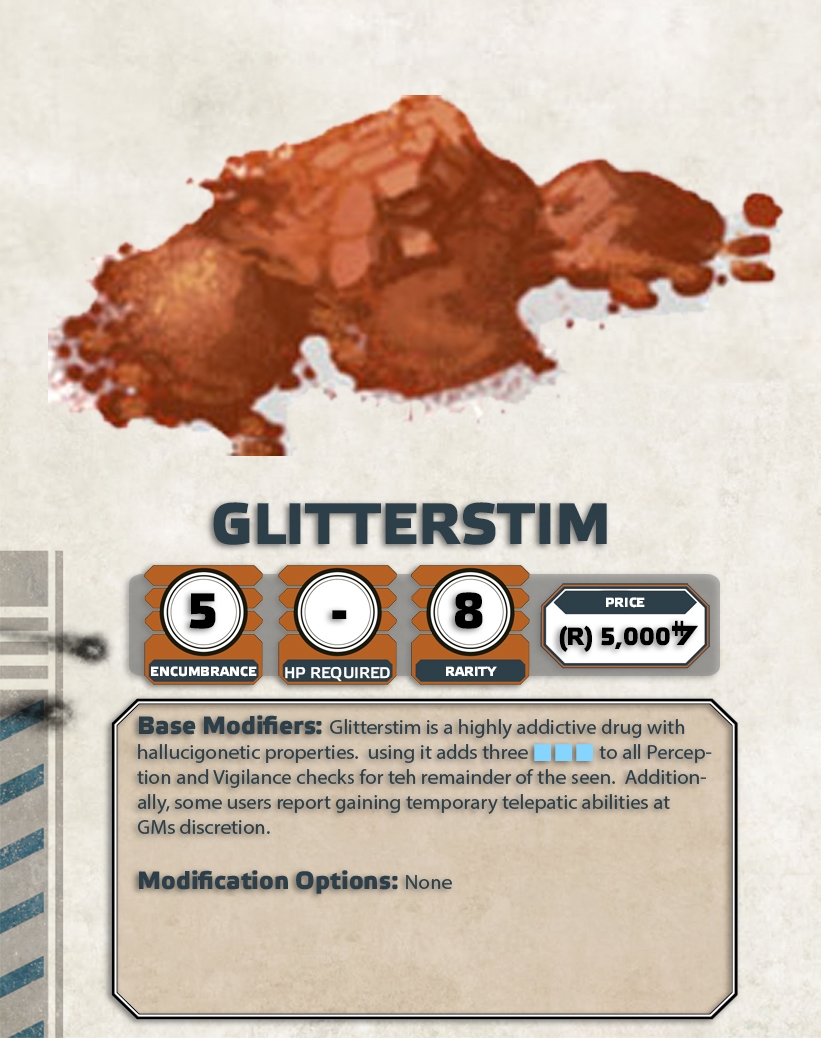