What is a Minion Group?

This is a question that has been asked by many upcoming Game Masters.  A minion is a type of NPC.  When the NPC is flagged as a minion you do not have a single enemy attacking the party but a group of enemies attacking the player characters.  You can always tell if a stat block is a minion because next to the NPCs name is the flag [MINION] as seen in the below example of a minion group. 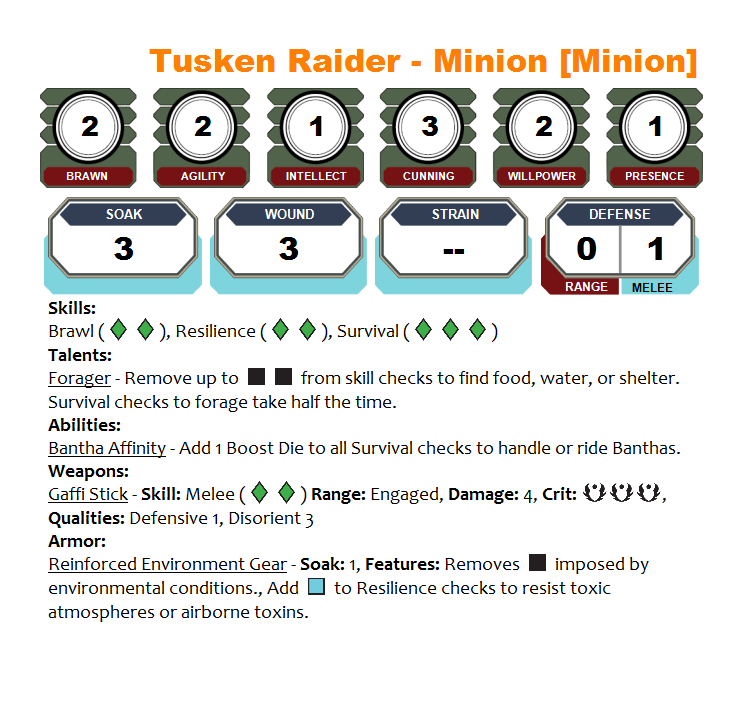 Do Minion Groups make a single attack or multiple attacks?

Minion groups act and function as if they were a single enemy on the battle map despite actually being a group of enemies.  That means that a Minion Group makes a single attack.
Now you may tell yourself that makes not sense as they all have blasters why could they not all shoot.  Well the answer to this question is more in light with a paradigm shift on how you understand a round in a combat encounter.  Traditional roleplaying a single round consists of a 7 second time slot.  You are making a single attack against a target.  Edge of the Empire, Age of Rebellion, Force and Destiny use a slightly different interoperation of what a single round is.  In the Star Wars RPG by Fantasy Flight Games a single round can be up to 5 minutes of actual time.  That means like in the cinematic experience of the movies each character is lobbing volleys of attacks in a single round.  The dice check is the story narrative of if any of those attacks hit their end target.
Now that we have that out of the way.  You can begin to see how a Single Minion group of lets say 3 Tusken Raiders can each be firing volleys of attacks.  The single narrative dice roll is to determine as a minion group how many hits did they actually make on the PCs.  That is right…. I said how many hits.  While you make a single dice check the total number of advantage can determine how many hits land on their intended target.  For each

Advantage the minion group rolls they land an additional hit onto their target up to the maximum number of hits equal to the total minion group size.

How do I assemble a Minion Group dice roll?

Recently a topic came up where a new Game Master was not understanding how to read the stat block of a Minion’s character sheet.  When you look at the stat block in the copy of your book for a minion it only lists what skills they have but not what their total trained ranks are.

We hope this was a helpful guide to understanding how minion skills work!