Legends of the Galaxy rules for play

Star Wars Legends of the Galaxy exists to help grow the Star Wars RPG community by introducing new players to learn how to play the Star Wars Roleplaying Game by Fantasy Flight Games (Edge of the Empire, Age of Rebellion, Force and Destiny)

A roleplaying game (RPG) is a cooperative storytelling experience between players and Game Master, or GM. Like many games, it has rules, components, and dice to help describe and resolve the action. Unlike most games, an RPG has no winner or loser and no opposing teams.

The GM serves as the judge and the storyteller. It’s their responsibility to present an exciting and compelling situation to the players, and to help determine what happens next when those players respond to a situation. GMs can invent their own stories, characters (NPCs), and adventures, or use adventures written by somebody else.

2-4 players take on the role of individual characters in the Star Wars galaxy. Over the course of the game you will choose what your hero does and says, and use the dice and game rules to determine whether you succeed or fail. Characters controlled by hero players are called Player Characters, or PCs.

Here’s a longer form article from FFG explaining an encounter from the game.

The Star Wars Roleplaying Game by Fantasy Flight Games is a unique story driven game using FFGs exclusive Narrative Dice.  The Narrative Dice are the magic of this system allowing you to go beyond just a simple success or failure into degrees of story telling that will open up the imagination of Players and Game Masters alike.

There are 3 CORE Rule Books that make up the Star Wars Roleplaying Games. These are Edge of the Empire, Age of Rebellion, Force and Destiny.

Each Core Rule Book is the same system but have a different Core Mechanic (Obligation, Duty, or Morality) and feature a variety of different careers, specializations, talents, equipment, force powers, and more.

In addition Fantasy Flight Games also produced a series of Adventure Modules, Supplement Books to go along with the game. This includes Specailization, NPC, and Crit decks.

Edge of the Empire

Edge of the Empire is the Roleplaying Experience intended for smugglers, bounty hunters, and the star wars criminal underworld. Characters like Han Solo, Chewbacca, Dash Rendar, Jabba the Hutt, Boba Fett, Cad Bane, and so many more fit perfectly into this roleplaying experience. With this game, there is a core mechanic known as obligation.

Obligation is the story of your past transgressions coming back to haunt your adventures. It may be a bounty that is on your head for dumping a cargo at first signs of imperials and Jabba the Hutt is out to get you. Perhaps it is you live by an oath or life debt in the case of Chewbacca.  You might be blackmailed for a past transgression you made.  You owe a debt to Jabba the Hutt for loosing a cargo.  No matter what your obligation is at the beginning of every game your Game Master will make an Obligation check to determine if your past will come up in today’s adventure making any campaign personal and exciting. Your decision and actions do matter in Edge of the Empire.

Characters can also use Obligation as a currency trading favors for equipment or assistance. It is a reflection of how well you are known in the underworld and if government factions may be out to get you. It can also be a story element that comes into an adventure when your past catches up with you. It is also a mechanic that can be a stress penalty towards your strain if you are worried about that bounty hunter you ran into on Ord Mantell.

For more information pick up a copy of the Edge of the Empire Core Rule book at your favorite local game shop.

Age of Rebellion is the Star Wars Roleplaying game that was created for the thrilling experience of fighting in the Galactic Civil War. As members of the Rebel Alliance, you fight against the tyranny of the Evil Galactic Empire. In Age of Rebellion, the core mechanic of the game revolves around Duty.

Duty is an exciting mechanic. It reflects your role within the Rebel Alliance. During each game, your Game Master will roll a Duty check to determine if you have any special secondary mission objectives to be added to the adventure at hand. You never know when you are needed to steal the plans to the Death Star.

Duty can be a story element like a mission objective, it can be a mechanical benefit in the example of having you emboldened in your role with the rebellion granting you and your allies a bonus to your session’s strain threshold. It can also be a reward when you and the members of your group reach a combined duty score of 100 and you gain an increase to the total group contribution rank in the Rebellion.

Each time your Group Contribution rank increases your character gains promotions in the ranks of the Rebel Alliance. It is also a determination at how well recognized you may be and how hard Imperial forces may be out to capture you.
For more information on Duty be sure to buy a copy of the Core Rule book of Age of Rebellion at your favorite local gaming shop.

Conflict is not a factor of being a good or evil action. Conflict remains neutral. If you lie for personal gain be it for good or bad intentions you still gain conflict.  What determines if that act was for good or evil despite your best intentions, at the end of each game you make a Morality check to see if the conflict you earned drives you closer to the light or dark side of the force.

Check out the Force and Destiny Core Rule book for more information. You can purchase the game at your favorite local game shop.

Use this PDF to help new players get an idea on how they can quickly spend the Advantages, Threats, Triumph, and Despair’s that they roll with their dice. 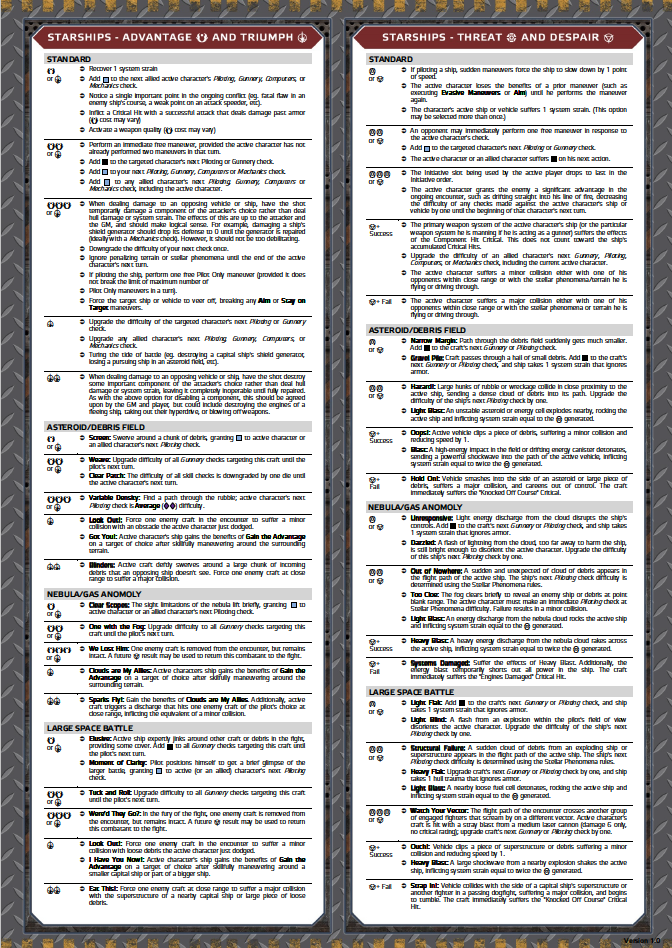 Use this PDF to help new players get an idea on how they can quickly spend the Advantages, Threats, Triumph, and Despair’s that they roll with their dice during starship combat.

Each round of the Star Wars Roleplaying Game by Fantasy Flight Games your character has a limited about of action economy in which they can use. Your character gets:

Star Wars Legends of the Galaxy uses a great cheat sheet that will tell you what you can do with your actions and maneuvers. Below please find the action economy cheat sheets for your character. 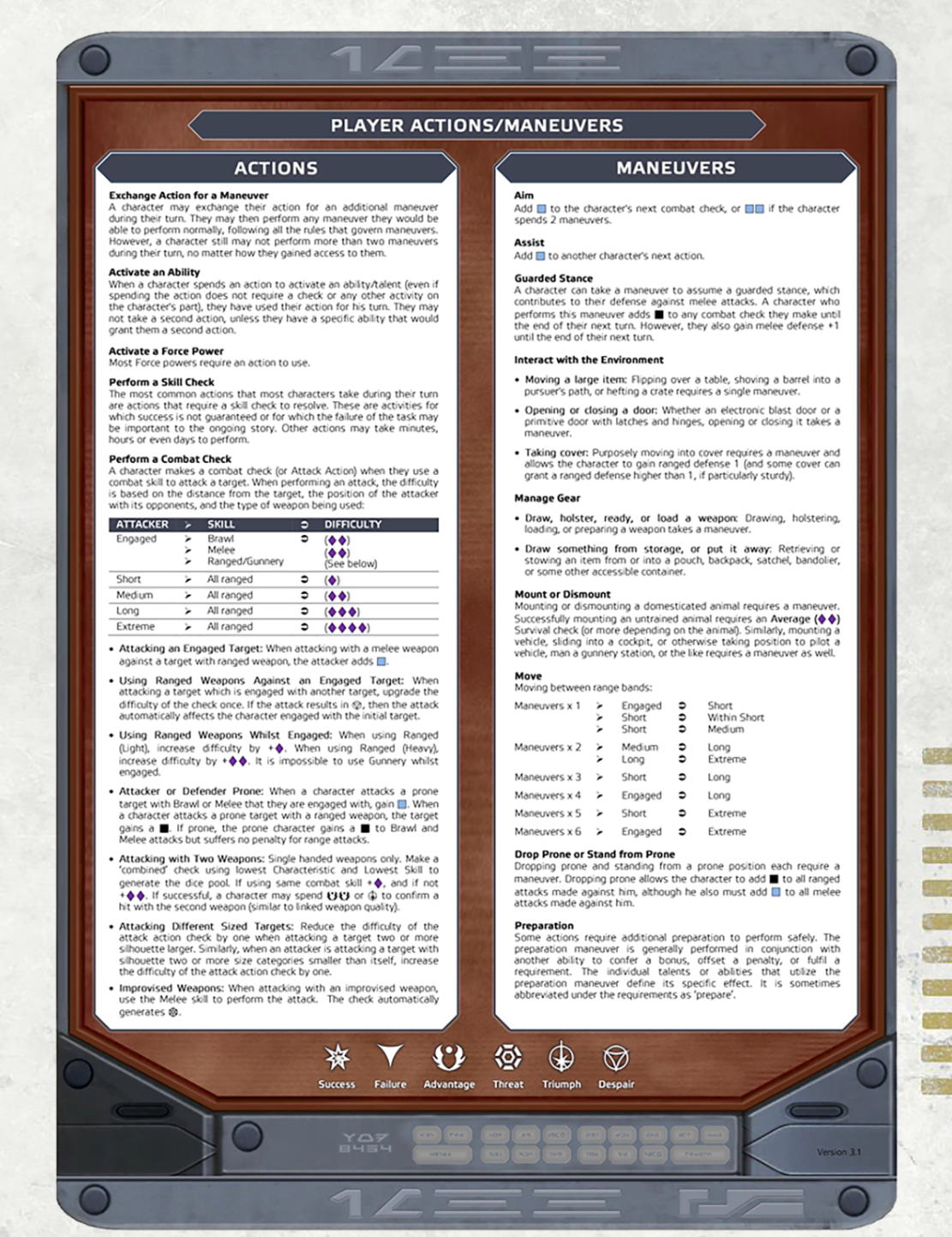 Use this PDF to help New Players know how they can spend their Actions and Maneuvers during their round. 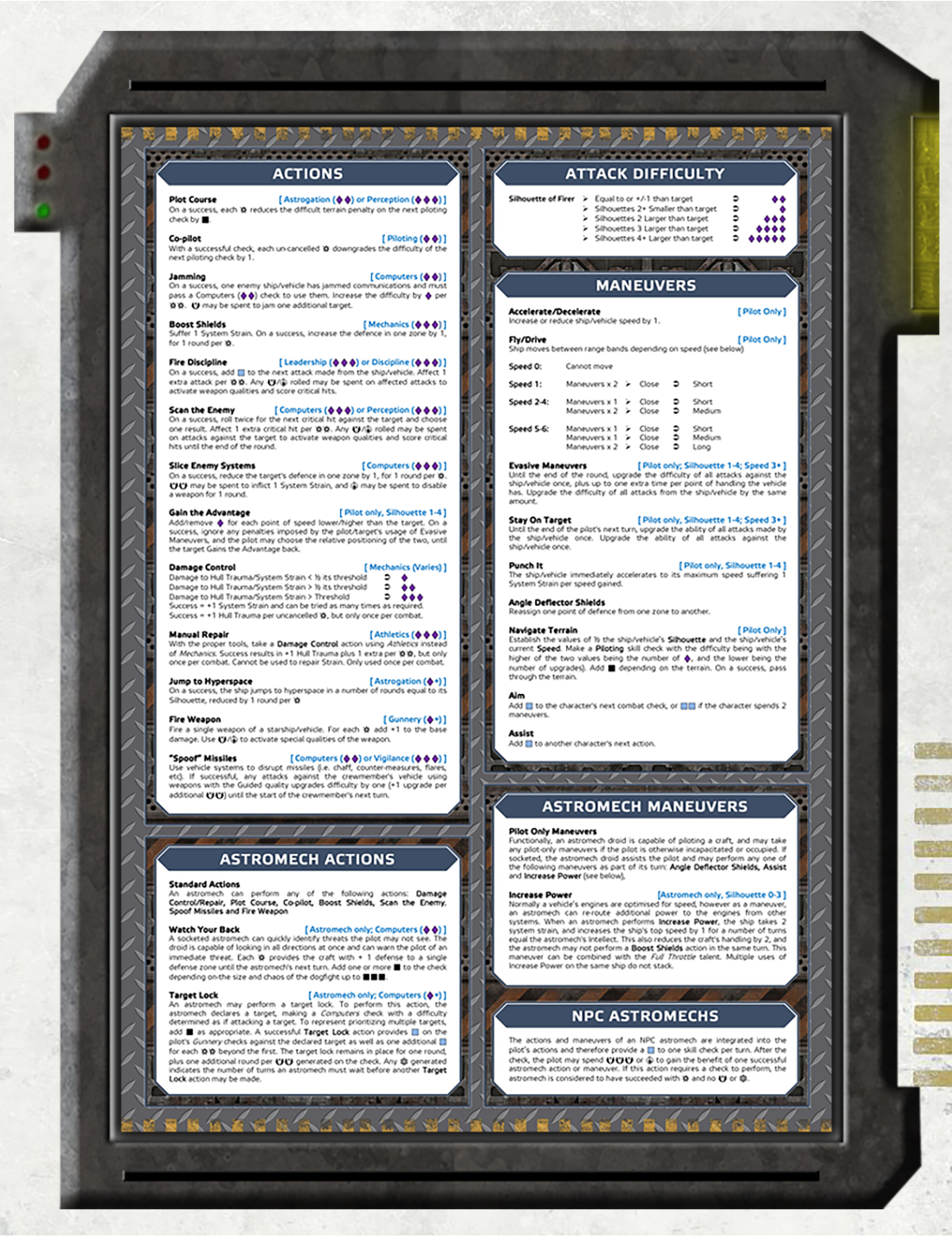 Use this PDF to help new players know how they can spend their Actions and Maneuvers during starship combat.

Are you Ready to Experience Adventure and Excitement in a Galaxy Far, Far Away…. 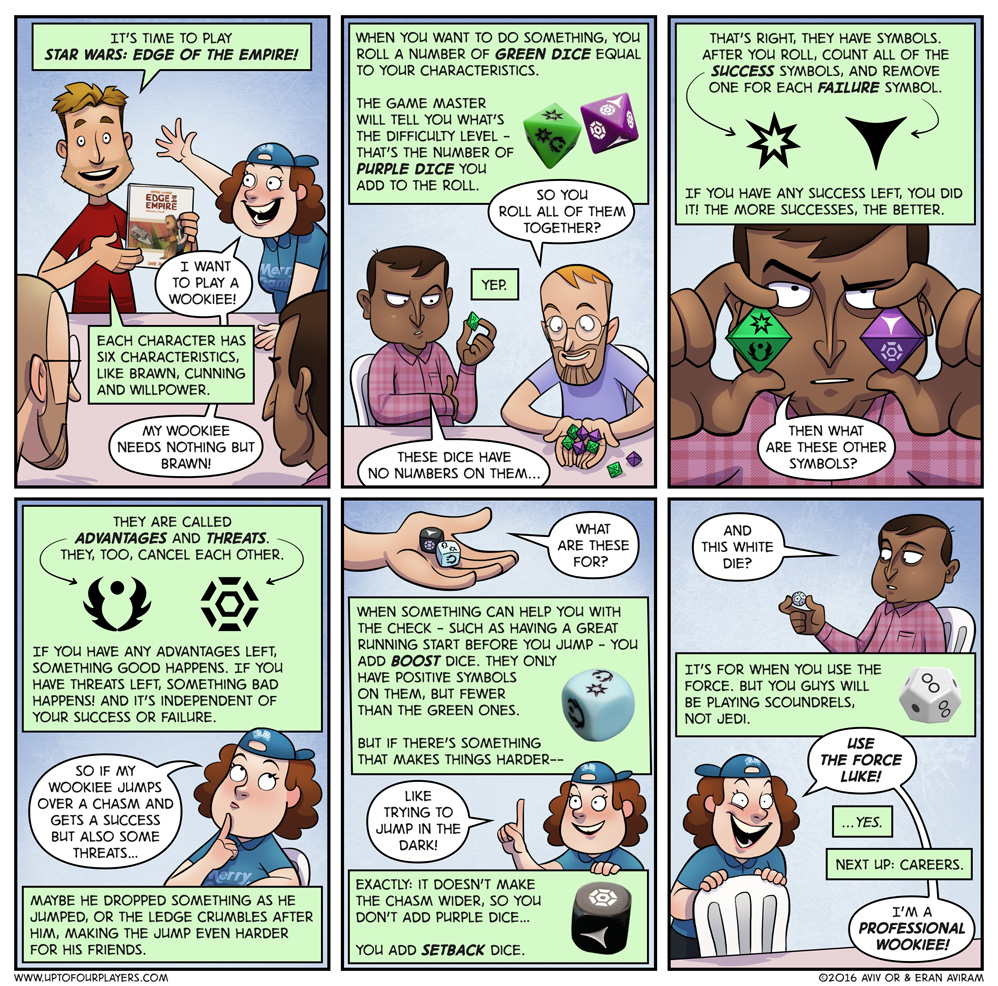 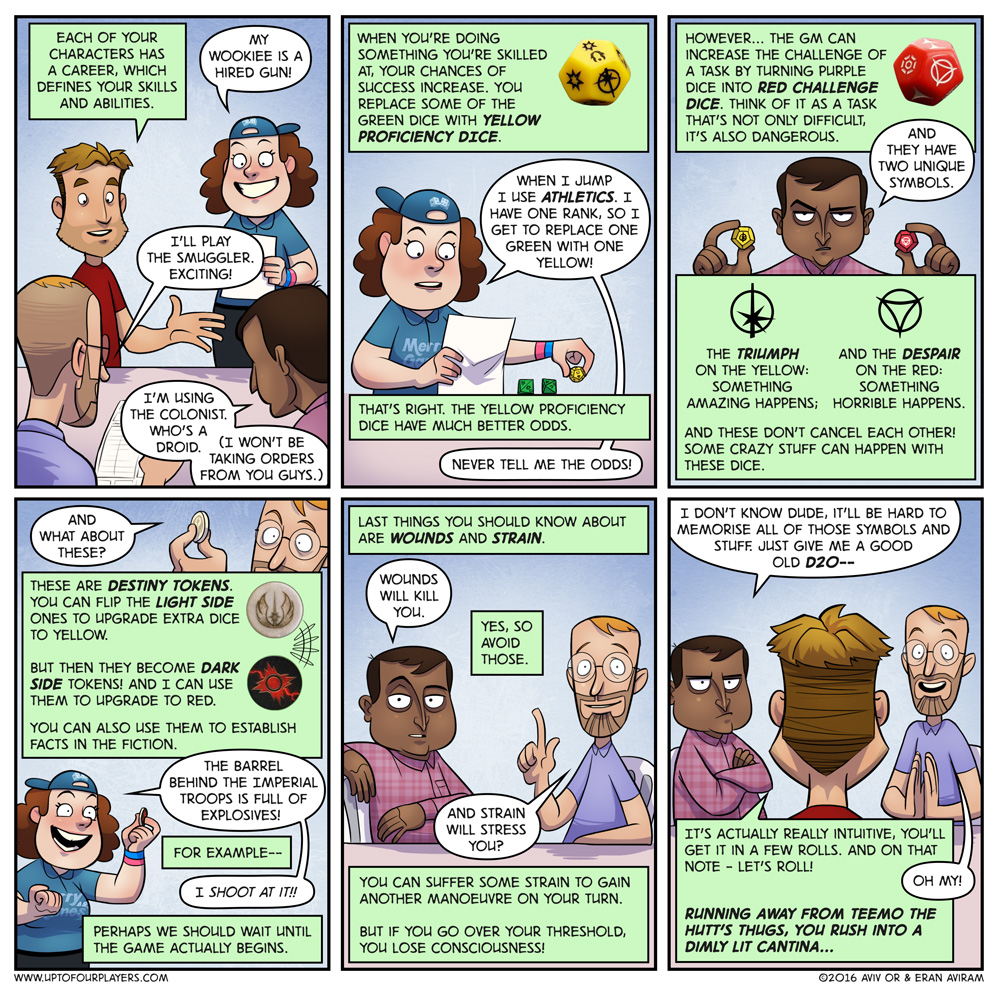