Guidelines for writing Legends of the Galaxy Adventures:

Length of Adventure: Adventures submitted to Legends of the Galaxy can be stand alone one shot adventures or they can be up to a 4 Act Story arch that is meant to be run over multiple sessions.  Each session should be able to be played between 4 – 5 hours, consist of 3 – 4 encounters, (both combat and noncombat encounters), at fit within overall story of Legends of the Galaxy.  Each Act or Session should have a clear, beginning, middle and end with clear goals for the players to achieve.
Game System:  When writing an adventure it is important to specify which product the adventure is being written towards.  Edge of the Empire, Age of Rebellion, Force and Destiny.  Each game has it’s own CORE MECHANIC ie Obligation, Duty, or Morality.  A GM should introduce each story using several different core mechanic styles in order to help a Game Master work why the players want to complete this mission.
Boxed Text:  It is helpful to get the setting, encounter, and tone of the adventure correct as intended by the original writer of the adventure.  Boxed Text is important and should be attached to each encounter to describe the situation or to be used as reference when a Player Character tries to ask questions about a specific mission or interrogation.
Balancing Encounters: It is important that game balance exists when writing an encounter for a Legends of the Galaxy game.  When using minions a game master should typically break minions into groups of 2 to 3 minions per group.  Game Masters should follow the following guide.

Hard Encounter – Equal number of minions to the party size, and 1 nemesis

Extreme Encounter – Equal number of minions to the party size, and nemesis with ranks in advisory talent

Mass Scale War – If the party is ever in a situation where they face impossible odds like a mass scale battle.  The Game Master should use the Mass Combat Rules from Age of Rebellion to determine the overall battle.  The Player characters should still follow encounters with a guide similar to the above encounter sizes.

Locations: GMs are encouraged to write stories that occur in a specific setting and can flush out the location giving players and GMs alike a rewarding environment to play.  Think about creating exciting locations, fun locals to work with, and make sure that your story feels like it is set in the Galaxy Far, Far Away.

Legendary Characters: Game Masters will create and introduce lots of NPC characters that players may encounter.  Having great personalities for your NPCs is important.  See the below table to use as a guide.  In addition, GMs may introduce characters from Star Wars Canon like Luke Skywalker, Han Solo, etc.  However, those characters should be used lightly and must follow Star Wars Canon.

If you’re having trouble coming up with something unique about a Non-Player Character, roll on the table below once or twice to provide some inspiration on providing a personality for that character. Ignore opposing or inappropriate results.

XP Rewards:  Legends of the Galaxy tries to standardize the XP awards a submitted adventure can offer to a player.  A typical scenario awards around 25-30xp.  GMs should award XP as follows:
Core Mechanic Awards: Game Masters should award points towards the Adventure’s CORE Mechanic based on which system the Adventure was written for (Edge of the Empire, Age of Rebellion, Force and Destiny.)
Duty:  In Age of Rebellion we use the Duty Mechanic.  Duty should be what drives a character to do Rebel Missions.  A Game Master may award between 5 and 15 Duty points per adventure to players for completing Rebel Missions.  The amount of the award should match the mission completed.  Secondly, a Player who gains a minion or starship can choose to turn over their earned reward for a max of 5 bonus duty points at the end of the session they earned the reward in.  In order for a member of the party to earn Duty they must first choose to join the Rebel Alliance.  When the table reaches 100 total Duty all members of the Rebellion gain a Group Contribution rank increase along with all the benefits detailed in the Age of Rebellion Core Rulebook.
Obligation:  In Edge of the Empire Obligation is the core mechanic.  Players are driven by their obligation as buying and trading favors is the currency of the underworld.  For completing a mission a player can reduce their total Obligation between 5 and 15 points.  However, a player can never reduce their total obligation below a score of 5.
Morality:  In Force and Destiny the core mechanic is called Morality.  This is increased and decreased as per the official rules printed in the Force and Destiny Core Rulebook based on conflict earned.  Game Masters should note that Conflict is not determined by if an action is good or evil.  It is more neutral.  The Conflict check that changes a player’s Morality at the end of the game was the determining factor if a player’s actions were good or bad according to the Will of the Force.
Story Rewards:  Each adventure should have up to 3 pivotal choices a group of players can make which can affect and change overall story of Legends of the Galaxy.  These story rewards should be noted on a player’s Adventure Log and reported when performing GM Reporting.  These decisions will influence the overall story of Legends of the Galaxy future adventure seasons.
Loot Rewards: Players may loot any of the defeated enemies gaining any additional equipment as noted in the stat block used from one of the official Fantasy Flight Games Star Wars RPG Books.  However, all equipment gained as part of looting is not an item they get to keep at the end of the adventure.  It is meant for use during the adventure only.  GMs should create 4 items of gear from the loot-able items and create Equipment Rewards that the PCs earn for playing in your adventure. 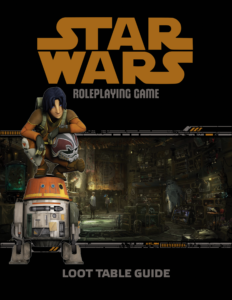 When determining what the value of any payments or equipment rewards a GM is encouraged to consider what kind of job the PCs are performing and award Equipment Rewards and payments based on the tables below.  To prevent the unbalancing of the Legends of the Galaxy economy GMs are encouraged to make the payment for any adventure more related to their Core Mechanic (Obligation, Duty, or Morality) than a true credit payout.  Small Credit Payouts of less than 1,000 credits for the completion of a job can be provided to each player.  Larger payouts of 10,000 credits or more should be divided equally by the total players at your table.  Furthermore, extremely high payouts should be done in the favor of story rewards or used in the pursuit of things like Rebel Bases, Farmsteads, business, starships, smuggling rings, etc.
The total payout of all credits, and a single equipment rewards should try not to exceed the total value of the jobs pay scales on the below tables.

You Are Our Only Hope!