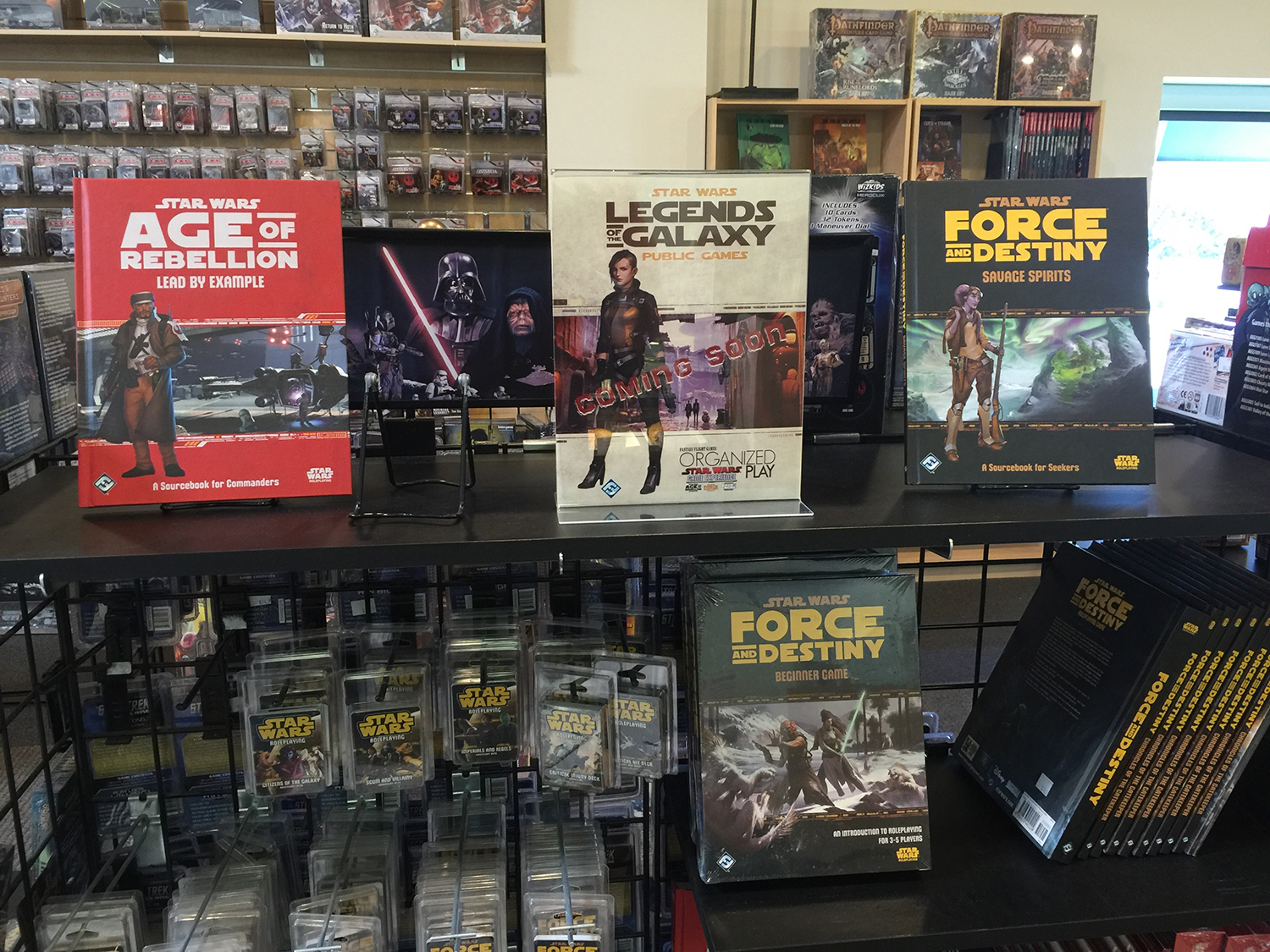 LEGENDS OF THE GALAXY is Coming to Fantasy Flight Games Event Center!

Legends of the Galaxy is an Organized Play Event for the Star Wars Roleplaying Game created by Fantasy Flight Games. Each event will host a minimum of 3 tables.

Edge of the Empire:

Survive deep in the depths of the Outer Rim and get entwined in a growing Hutt Turf war. Smuggle your cargo through harrowing blockades, Hunt down some of the worst Scum and Villainy as a Bounty Hunter, Build your own Criminal Enterprise making a name for yourself, or simply learn to survive on the Edge of the Empire. From one port filled with the wretched hive of scum and villainy to another, our Heroes survive on their wits, skills, and sense of adventure. Legends of the Galaxy has you working for a mysterious benefactor known as THE BARON. The Baron is a Kel Dor Crimelord who looks to increase his intelligence and contact network gaining power as the Hutt Cartels do battle with one another.

With the destruction of the GALACTIC EMPIRE’S Battle Station known as the DEATH STAR our Heroes must move quickly to evacuate their base on Yavin IV and look for a new save haven to call home. Gathering intelligence on Imperial Activities, searching for new potential bases, building alliances, you a Freedom Fighter in an Alliance to Restore the REPUBLIC. Our Heroes find themselves working for a Rebel Cell who is affiliated with a known as a Terrorist by the Empire. He goes by the name of THE BARON. He sponsors this Rebel Cell to gain vengeance over the Empire’s genocide of the Baran Do Sages. Help the Baron gain influence and grow his intelligence network so that he may use it to help overthrow the Empire and Restore Peace and Justice to the Galaxy…

The Jedi are all but extinct. Their light has gone out of the galaxy. In Legends of the Galaxy you are one of the few remaining Force Sensitive individuals in the known galaxy. Assembled by a Mentor known as Romund who is allied with Lor San Tekka and the Church of the Force. Scour the ancient tombs and temples across the galaxy in search of any Force knowledge before the EVIL GALACTIC EMPIRE can extinguish all Light in the Galaxy. Partner with an Ally of the Church of the Force known as THE BARON who seeks to find the missing members of the precognitive force tradition known as the Baran Do Sages. Grow strong in the Force and become a Legend of the Galaxy…

Can anyone play? – Yes, Legends of the Galaxy is open to the Public and anyone can come and enjoy a Galaxy Far Far Away…

Is it free to play? – Yes, we do not charge anyone to play in Legends of the Galaxy. We simply ask that you own at least 1 of the 3 CORE Rule Books, Edge of the Empire, Age of Rebellion, or Force & Destiny.

What if I don’t own any product? – No Problem, during your first few sessions you are not required to own any books or product. We just want you to come and enjoy the game. I am confident you will love it. Once you play I am sure many of you will want to support the product line.

Can I bring my own character? – Yes, you can bring your own character. Please use the standard character creation rules laid out in the CORE Rule Book. When creating your character determine you have a starting party size of 5. Starting characters only. Knight Level play is open for convention play only during the beginning of Legends of the Galaxy. We only ask that if you bring your own character you have at least 1 of the 3 CORE Rule Books and either the Supplement Book or the Character Deck for the Class Specialization you wish to play.  You can fill out your character on the Official Legends of the Galaxy Character Sheet.

What if I don’t know how to play? – No Problem, the first 30 min of every scenario will be a Learn to Play Session.

Can I bring a friend? – Of course you can. We love seeing new faces join our community of gamers.

How old do I have to be to play? – At Legends of the Galaxy our games are Family Friendly events and accept people of all ages. Disruptive players may be asked to leave so you can feel comfortable bringing Star Wars Fans of all ages.

Do I need to know anything about Star Wars? – We allow anyone to play. You may be new to Star Wars, only seen the movies, or know every detail about the Extended Universe. We accept all who want to come and play no matter your knowledge of skill level of play.

What is the Timeline for the Living Campaign? – This series of adventures is set during the Galactic Civil War. The Death Star was just destroyed by Luke Skywalker, Ace pilot of the Rebellion and soon to be Jedi Knight. It is located in the time between Star Wars Episode IV A New Hope and Star Wars Episode V The Empire Strikes Back.

How do you verify my character experience? – After each scenario you will be given an adventure log filled out by your game master and sent to you. This will detail your game experience, equipment, story rewards, obligation, duty, morality, contacts, enemies and so much more. Simply bring your Adventure Logs with you to each session in case a Game Master wishes to look up your adventure history.

Can I help run an event? – Of course, Legends of the Galaxy is looking for experienced Game Masters, Adventure writers, and Hosts interested in participating in and running their own events. We only ask that our Game Masters keep us informed, reporting their Adventure details to help influence and shape the future of the galaxy.  Contact Us to become a GM

So if you are ready to adventure in a Galaxy Far Far Away, then Join and become a Legend of the Galaxy…